Home » Entertainment » Keith Urban Brings Winnipeg Women on Stage, Helps Them Get a Day Off Work

Keith Urban Brings Winnipeg Women on Stage, Helps Them Get a Day Off Work 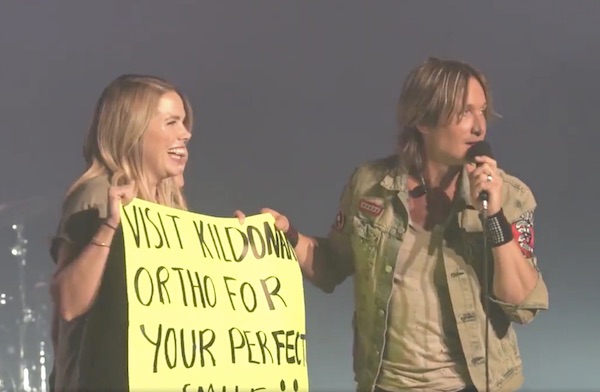 WINNIPEG — Two women were all smiles Wednesday night when country superstar Keith Urban pulled them up on stage at Bell MTS Place. He also managed to help them score a paid day off from work.

The sign read: “Visit Kildonan Ortho for your perfect smile.”

The whole encounter was caught on video, where Urban tweeted it from his official account. As of Thursday morning, it had been viewed more than 25,000 times.

The women told Urban that their boss made a bet with them.

“If you can get Keith Urban to say to go to Kildonan Orthodontics to get your teeth straightened, he would give us a day off,” Paddock said.

Urban asked the women to call up their boss, Dr. Brent Nickolaychuk, who he put on speakerphone for the arena to hear.

“I’ll tell you what, if you give them the day off work, maybe a little pay rise, it will all work out and I will promote your company through and through,” Urban said.

Nickolaychuk quickly agreed, saying, “You got it. It’s a deal”

Urban then held up the sign and posed for a photo, giving the widest grin possible.

The women took a selfie with Urban before returning to their seats.

Urban’s Winnipeg stop on his Graffiti U World Tour attracted about 13,100 fans.

Dr. Nick made a bet with our assistants, Jenna and Lauren, that he would give them a paid day off from work if Keith Urban says “Kildonan Orthodontics is the best place to have your teeth straightened”. Well he said it and also called Dr. Nick in front of everyone at the MTS centre and he agreed to give the entire staff a day off. Dr. Nick was not a fan of country music, but he is now! Keith Urban might just be Dr. Nick’s new favourite artist! #keithurban #kildonanorthodontics @keithurban