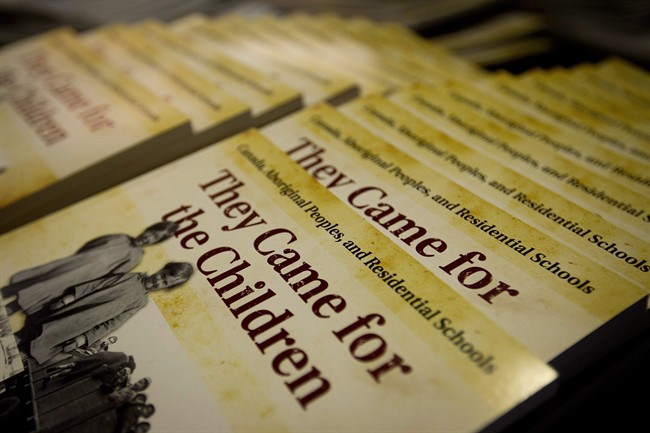 Historical books detailing residential schools released by the Truth and Reconciliation Commission sit on a table as the commission releases an interim report during a news conference in Vancouver, B.C., on Friday, February 24, 2012. (THE CANADIAN PRESS/Darryl Dyck)

STEINBACH, Man. — A company that operates a chain of radio stations is apologizing for running a paid advertisement that downplayed the effect of the residential school system on Indigenous people.

Manitoba-based Golden West says the one-time program produced by the Frontier Centre For Public Policy was broadcast on some of its radio stations in Saskatchewan.

The two-minute-long ad said it was a myth that residential schools robbed Indigenous kids of their childhood and that most Indigenous children never went to the schools.

Golden West says it has been a leader on the Prairies for 60 years in broadcasting positive, uplifting content.

The company says the paid ad does not reflect the views of Golden West in any way.

“We apologize for the aired commercial, and for the impact it had on our listeners,” Golden West says in a release. “An apology is being issued on the affected stations, and measures are being taken to ensure material like this does not air on our stations in the future.”

Officials at the Frontier Centre for Public Policy, a Winnipeg-based think-tank, were not immediately available for comment.

The centre’s website says it received charitable status in 1999 and has offices in Alberta, Saskatchewan and Manitoba.

The Truth and Reconciliation Commission heard from more than 6,000 witnesses over six years and its final report in 2015 found that residential schools amounted to cultural genocide.

Around 150,000 Indigenous children went to residential schools and it’s estimated around 6,000 children died.

In 2008, the federal government apologized to former students saying it was a sad chapter in Canada’s history and the policy of assimilation was wrong.