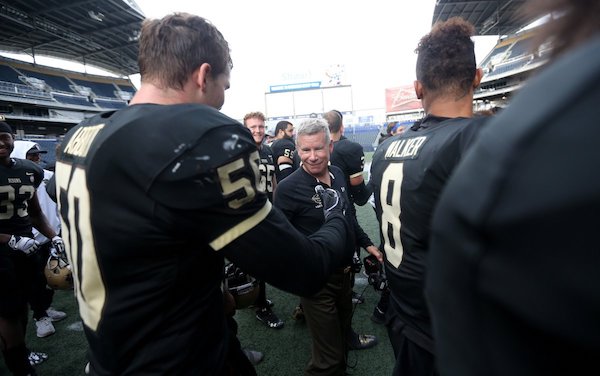 WINNIPEG — With the Manitoba Bisons looking down on four short weeks remaining in the regular Canada West football season, the Herd knows that pulling out a win this weekend is crucial in reaching the post-season.

The Bisons are heading into the annual Homecoming Game on Saturday against the visiting Regina Rams. Both teams sit at 2-2 for the season so far, with Manitoba winning their last two games. Working off of that momentum is something the third-place Bisons hope will translate into a victory at Investors Group Field.

Third-year quarterback Des Catellier is turning heads this season and is tied for first in Canada West. The Calgary native has 13 passing touchdowns and second in passing yardage, averaging 352 per game.

“It’s the toughest conference in the nation, not even close. This weekend against Regina is going to be the exact same thing; two really good football teams playing. Somebody’s going to win and both teams are going to lay it out.”

During half-time, six new recruits for 2019 will be introduced at centre field. It’s only the second time the Bisons have done such a flashy introduction to unveil their latest and greatest to next season’s roster.

“It’s special. It’s pretty big time,” Dobie said of the recruit ceremony. “They’re going to be in front of the homecoming crowd. They’re going to sign their letters of intent… officially commit to the University of Manitoba. That’s the real deal.”

Kickoff is at 2 p.m. Saturday. The game will air live on CanadaWest.TV (fee required) and on SaskTel MAX TV for those watching in Saskatchewan.

Homecoming is the highlight, but there’s plenty of action going on for our teams! Get prepared for it all in our weekend preview. ????? #gobisons #umhomecominghttps://t.co/0yVqcbliTZ pic.twitter.com/TKYHmeHS3D