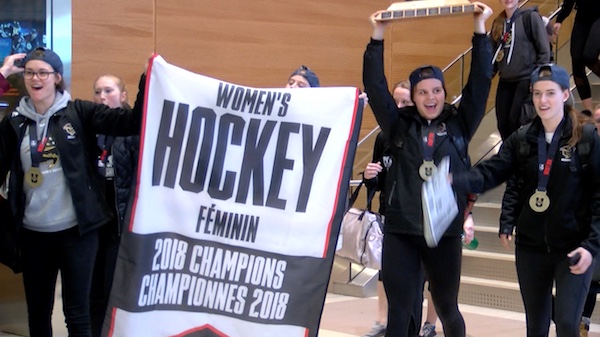 The Manitoba Bison women’s hockey team returns home in Winnipeg on Monday after winning the U Sports national championship for the first time in their team’s history on March 19, 2018. (CHRISD.CA FILE)

WINNIPEG — The Manitoba Bison women’s hockey team is returning to the ice on a high note after clinching a national championship last season.

Manitoba is already ranked first in the Canada West preseason coaches’ poll. Twenty-one of 24 players are returning for the Herd, including steller second-year goaltender Lauren Taraschuk.

The Bisons showed an impressive 6-1 record in exhibition action last month, picking up their winning ways exactly where they left off in the spring.

To say the Herd is hyped about the 2018-19 season would be a major understatement. The energy in Wayne Fleming Arena tonight will be electric when the Bisons reveal their U SPORTS and Canada West title banners to a hometown crowd.

Following the ceremony, the Bisons will get back to business and open their season against the Calgary Dinos.

The Dinos missed the conference playoffs last season, ending things with an 8-20 record. Calgary is ranked seventh in the preseason coaches’ poll.

Puck drop is 7 p.m. tonight on the University of Manitoba’s Fort Garry campus. Fans are being asked to wear white.

Tickets are $10 at the door and free for U of M students and fans 17 and under. Both teams meet again Saturday at 2 p.m.

The Bisons are also asking fans to bring a can of food for the UMSU Food Bank tonight. The Sport for North initiative is also collecting gently used sporting equipment for those affected by rail service in the Churchill community.

It’s this week’s edition of #BisonsTV!

Hear from @umbisonsWHKY captain Erica Rieder, as she talks about training camp and the champions tour from this summer!#gobisons #umanitoba pic.twitter.com/ozHbQuyCMA

Pre-season play continues for the Bison men’s hockey team south of the border, while both men’s and women’s basketball teams are in the city at Investors Group Athletic Centre and the Duckworth Centre, respectively.