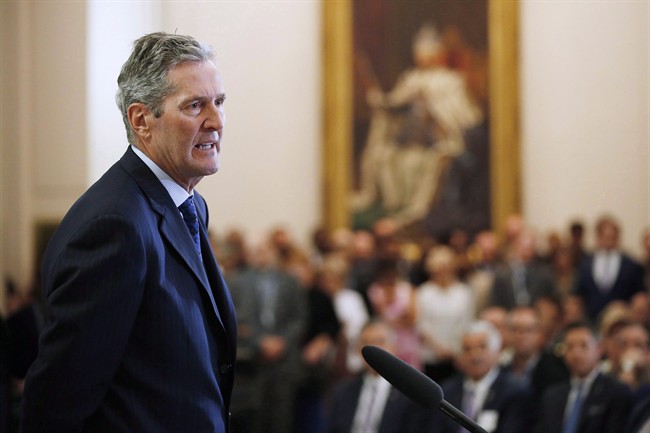 Manitoba Premier Brian Pallister speaks during his cabinet shuffle at the Manitoba Legislature in Winnipeg on Wednesday, Aug. 1, 2018. (THE CANADIAN PRESS/John Woods)

WINNIPEG — Brian Pallister’s abrupt about-face on a carbon tax came after the Manitoba premier felt like he was being used as a prop by Ottawa, and sources say it was a surprise to most in his own caucus.

The move, which aligned Pallister’s Progressive Conservatives with other Canadian conservative leaders, came after months of his insisting that a Manitoba-made tax that met the federal Liberals halfway was better than having a levy imposed by Ottawa.

Things took a sharp turn last month when Prime Minister Justin Trudeau visited Manitoba and wished publicly that Pallister “would encourage some of the other conservative voices around the country to recognize that having a plan to fight climate change is something that all Canadians … have a right to expect.”

Pallister gave no indication at the time, but on Wednesday he suddenly announced he was dropping his plans for a carbon tax and said he did not appreciate Trudeau’s comments.

“I don’t think anybody likes to be used as a prop, and I certainly am not inclined that way,” Pallister said a day later.

The Canadian Press interviewed three Manitoba government sources, who spoke on condition of anonymity, and used documents along with comments from Pallister to piece together what happened.

Pallister ruffled some feathers in PC circles during the April 2016 provincial election when he included a promise to put a price on carbon in the party’s platform.

Conservatives don’t generally run on promises of new taxes, but the federal Liberals had already signalled their intention to enact a nationwide carbon price.

In October 2016, the federal government said provinces would have to bring in a cap-and-trade system or charge a rising carbon tax on gasoline and other items. The tax would start at $10 a tonne in 2018 and reach $50 per tonne in 2022. Any province that balked would be hit with an equivalent “backstop” tax collected by Ottawa.

A year later, Pallister’s government announced it would charge a flat $25-a-tonne carbon tax and argued the federal government shouldn’t push further because of the billions Manitoba has invested in clean hydro.

Manitoba also released a legal opinion that stated the federal government had the constitutional authority to enact a carbon tax, but the province might be able to rebuff the move if it came up with its own tax that was equally effective at reducing emissions.

That’s when Pallister began the mantra that billed his tax as the better of two options.

“If we just say no, we get Trudeau,” became the slogan.

There were concerns in caucus. Legislature members didn’t like the idea of having to sell a tax.

But with an agriculture exemption, and with the Opposition NDP open to the full $50 federal plan, the feeling was the Tories were going to be on the right side of public opinion.

“The caucus was united, but we were hearing noise from party members,” one source said.

“There was cautious acceptance, and an understanding that the provincial plan was better than the alternative,” said another source. “Plus, we would have control over how the carbon tax revenues would be spent.”

Pallister promised to use the cash from the carbon tax to cut other taxes and help offset rising energy prices.

And if Manitoba had to go to court to fight further increases, it would likely come in 2020, an election year. The Tories could promote the dispute on the campaign trail.

Also helping Pallister at the time was that only Saskatchewan had come out firmly opposed to the carbon tax. Ontario PC leader Patrick Brown supported a carbon levy that could be offset by other tax cuts.

But Brown was replaced by Doug Ford, who has firmly opposed the tax. New Brunswick Tory Leader Blaine Higgs then promised to fight the federal plan in court. And Alberta’s NDP Premier Rachel Notley pulled her province out of further carbon tax increases because of a court ruling that put the Trans Mountain pipeline expansion on hold.

The political landscape was shifting, but Pallister held firm at a premiers conference in New Brunswick in July, where he met with Ford and Saskatchewan Premier Scott Moe.

“Pallister was quite adamant in his explanation of ‘this is why we’re doing this,”’ one source said. “It was kind of an agree-to-disagree thing. It wasn’t acrimonious or anything.”

“One of Ford’s staffers was overly enthusiastic … and the premier immediately corrected that,” a source said.

Then Trudeau came to Winnipeg in September.

In a private meeting, Pallister said, the prime minister gave no ground on the federal backstop. In public, Trudeau held Pallister up as an example to other conservatives.

Pallister said last week it was at that point that he lost any hope the federal government might budge.

Pallister said he had not been in contact with Moe or Ford in the two weeks before he announced he was pulling out.

He told a small number of people of his plan to scrap the provincial carbon tax several days before his announcement, one source said.

For the Tory caucus, it came as a surprise. Members were told just before or found out when Pallister stood in the legislature Wednesday and announced Manitoba would not enact a tax.