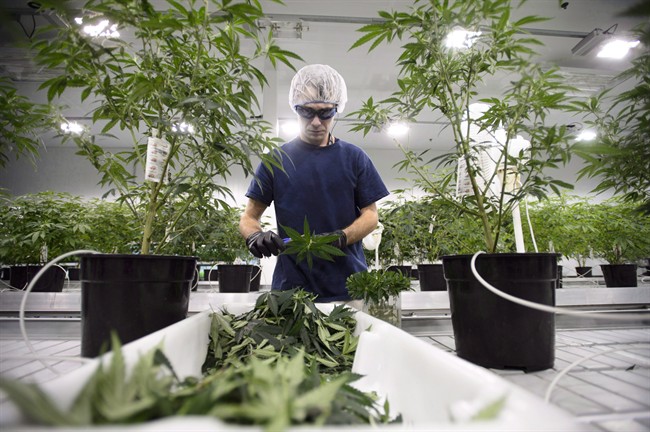 The U.S. Customs and Border Protection agency says in an updated statement that someone working in the legal pot industry in Canada will “generally be admissible” as long as their travel is not related to the industry. Workers process medical marijuana at Canopy Growth Corporation’s Tweed facility in Smiths Falls, Ont., on Monday, Feb. 12, 2018. (THE CANADIAN PRESS/Sean Kilpatrick)

OTTAWA – Working in Canada’s legal pot industry won’t deprive you of a Disney World holiday after all, but the U.S. government’s about-face for cannabis employees doesn’t change anything for Canadians who want to smoke weed legally after next week.

U.S. Customs and Border Protection quietly updated its statement on Canada’s legalization of cannabis on Wednesday to say Canadian citizens who work in the industry and want to travel to the United States should “generally be admissible” as long as their trip is unrelated to the marijuana industry.

Workers who want to travel for business related to the industry will still be denied entry, the statement says.

It is a significant change from the policy issued on Sept. 21 which said working in the industry “may affect admissibility.”

“I’m shocked,” said Len Saunders, a Canadian working in Washington State as an immigration lawyer. “This is what I was hoping for.”

When the original statement came out in September, he said he figured two years of lobbying efforts had failed. He has no idea what changed in the last three weeks.

“This helps hundreds of thousands of Canadians who have any sort of direct or indirect involvement in the Canadian cannabis industry,” he said. “Everyone is calling me, whether it’s CEOs or regular workers or those with remote connections to the cannabis industry.”

Saunders had been telling Canadians in the industry that they should be concerned. Now he said he will tell them to print out this new statement and bring it to the border to ensure whomever they deal with can read the policy.

Saunders also said it’s important to note that Canadians involved in any elements of the U.S. cannabis industry, in states where it is legal like Colorado or Washington, may still be denied entry.

But for Canadians in the Canadian industry, it is “the best case scenario.”

“Can you not go at all as a business visitor, can I go to a cannabis conference?” he asked. “I don’t know.”

He noted the statement is also specific to Canadian citizens and employees, but it doesn’t mention investors or Canadian permanent residents.

“Logically, it should apply to them too but none of the things we’ve been hearing from CBP has been logical,” he said.

Chang, who also is licensed to practice law in California, said much of this will be a matter of wait and see. It also may matter where you attempt to cross.

Chang said he had a client who was a senior executive at a cannabis company in Canada who was turned down at the Vancouver airport earlier this year because of his job. But since then, after legal inquiries to a port closer to Toronto, it was decided he was eligible to travel for tourism purposes.

Chang also said this policy doesn’t change anything for Canadians who want to smoke pot after it becomes legal. Admitting to smoking legal pot could keep you out of the U.S. if the border agent thinks you are a drug addict.

“Legalization doesn’t protect you from everything,” said Chang.