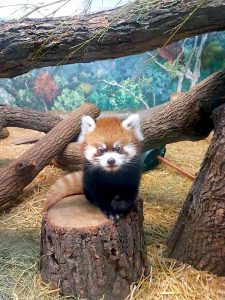 WINNIPEG — The Assiniboine Park Zoo needs the public’s help in naming a cute addition to its red panda family.

The male cub was born earlier this summer to parents Sachi (female) and Tango (male).

“Red pandas are an endangered species due primarily to loss of natural habitat in the wild,” said Grant Furniss, senior director of animal care and conservation at the zoo.

“The Assiniboine Park Zoo has a long and very successful history of participation in the red panda breeding program and the birth of a new red panda is definitely something worth celebrating.”

The young cub is now exploring his habitat in the Toucan Ridge exhibit.

Voting is now open to select a name for the cub. The following choices have been short-listed:

Votes can be cast online and will remain open until Tuesday, October 16 at 4 p.m. Results will be announced on October 17 on the zoo’s social media pages.