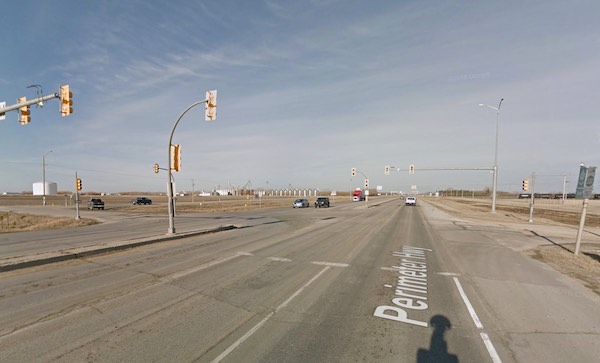 Traffic lights at the intersection of the Perimeter Highway at the La Salle turnoff were installed in recent years to improve safety. (GOOGLE STREET VIEW)

WINNIPEG — The province is closing several dangerous intersections along the South Perimeter Highway while it works to implement safer alternatives.

The province is targeting 24 locations from Fermor Avenue to Portage Avenue at intersections that are controlled with stop signs.

The three-year, $19 million project will include the construction of several service roads, such as from Oakland Road to the Wilkes Avenue interchange, while making improvements to existing service roads at Highway 3/Oakland Road, and opening the roundabout in Oak Bluff at Highways 2 and 3.

As part of the South Perimeter Highway Safety Plan, the province will monitor further high collision locations around the Perimeter to determine if further action is needed.

“Our government is taking immediate steps to improve public safety, while at the same time balancing the need for further consultation with municipalities and affected residents,” said Schuler.

“We will ensure this work is done with the best interests of all Manitobans in mind.”