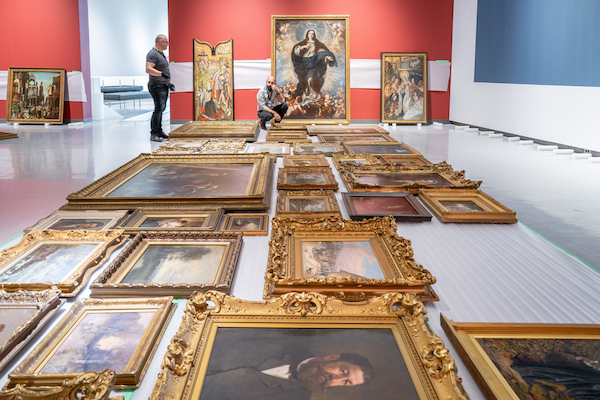 The Winnipeg Art Gallery is making some of its oldest works of art cool again.

A soon-to-open exhibit is presenting 16th-to-19th-century paintings in salon-style fashion.

Salon Style: Reimagining the Collection features nearly 200 paintings that were rediscovered as the WAG moves around its galleries to make way for the future WAG Inuit Art Centre.

“Salon Style was like putting together a giant puzzle and the result is spectacular with so many works juxtaposed and ready to be rediscovered,” said Dr. Stephen Borys, WAG director and CEO.

“As construction of the WAG Inuit Art Centre continues, it has been necessary to close two of our exhibition galleries — so we’re doing our best to keep the WAG’s permanent collection on view in creative ways.

Salon-style references how the Paris Salon installed paintings beginning in the late 17th century and continuing through the 19th century. Attempting to save space by hanging as many paintings as possible on one wall, the Salon hung works very close together, from floor to ceiling, often without regard for chronology or genre.

Salon Style opens October 16 and runs into 2019. The exhibition is being co-curated by Stephen Borys and Andrew Kear, WAG chief curator and Curator of Canadian Art.