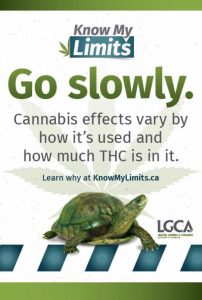 The ‘Know My Limits’ campaign educates Manitobans on strategies for safer cannabis use. (LGCA)

Cannabis becomes legal nationwide on Wednesday, and the Liquor, Gaming and Cannabis Authority of Manitoba will be running the Know My Limits campaign to accompany legalization.

“Our government has been focused on protecting health and safety throughout the legalization process,” said Justice Minister Cliff Cullen.

“While we can never eliminate all risks associated with using cannabis, we are committed to providing legal users with accurate information about how to reduce risk.”

The campaign focuses on teaching Manitobans to use cannabis safely, such as informing users not to mix it with alcohol. Other keypoints include: “Look at total THC” and “Cannabis edibles take time.”

The Can & Can’t of Cannabis arm of the campaign launched in September. Ads will run in English and French across the province via a media mix of digital and social media, as well as billboards, transit, and poster ads in strategic locations, including licensed cannabis stores.