Manitoba Gets Tougher on Distracted Driving, Triples Fines to $672 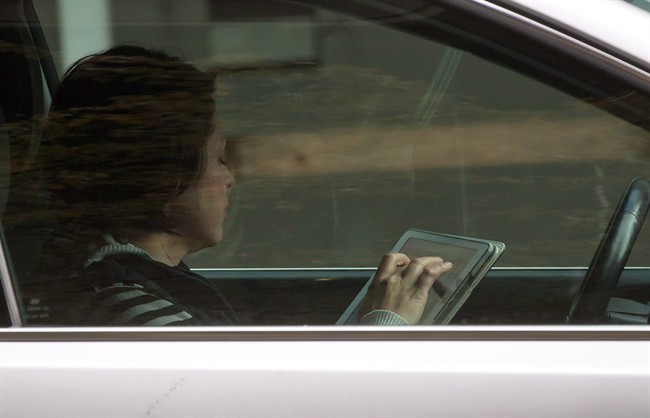 A woman uses an iPad while behind the wheel of a vehicle stopped in traffic at a red light in downtown Vancouver, B.C., on Monday, October 20, 2014. (THE CANADIAN PRESS/Darryl Dyck)

WINNIPEG — The Manitoba government has taken the gloves off and introduced tougher penalties for motorists who choose to text and drive.

Beginning November 1, a first-time offence for distracted driving will cost you $672 — up from a $203 fine previously.

Those caught operating a cell phone or other hand-held electronic device will have their licence immediately suspended for three days and receive five demerits for each infraction — up from two. Officers will also notify Manitoba Public Insurance, who may issue further penalties depending on the driver’s record. A subsequent offence will result in a seven-day licence suspension within 10 years.

MPI will also charge a $50 licence reinstatement fee on behalf of the government following the suspension.

“These stricter penalties mirror those for impaired driving because the consequences are just as serious,” said Infrastructure Minister Ron Schuler.

“This legislation underscores the seriousness of distracted-driving infractions and enacts stricter penalties for this behaviour.”