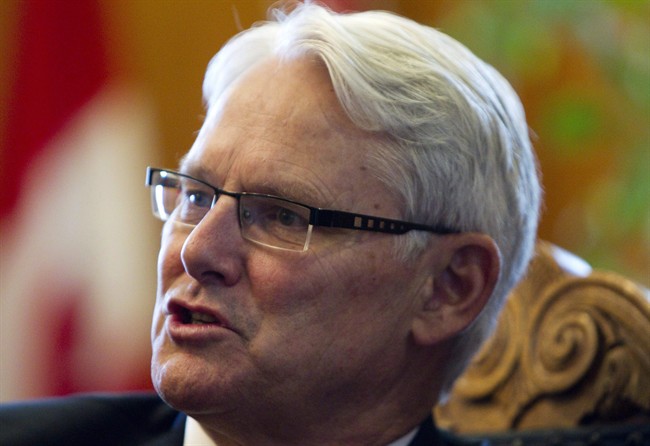 B.C. Premier Gordon Campbell speaks during an interview in his office in Victoria on February 14, 2011. The Manitoba government has hired former British Columbia premier Gordon Campbell to review two major hydro projects that have added billions of dollars to the provincial debt. Campbell will look at whether the Keeyask Generating Station and Bipole Three transmission line — projects built under the former NDP government — were built based on sound economics. (THE CANADIAN PRESS/Jonathan Hayward)

Campbell will look at whether the Keeyask Generating Station and Bipole Three transmission line — projects built under the former NDP government — were based on sound economics.

Among the issues Campbell will investigate is whether the projects were built long before domestic demand required them, and on overly optimistic projections of export prices.

The transmission line and generating station have run over budget, and export prices for electricity have dropped since the projects were given the go-ahead a decade ago.

To help cover the cost, Crown-owned Manitoba Hydro has been asking for regulatory approval for annual rate increases of 7.9 per cent.

Premier Brian Pallister first announced plans for the review last spring, and it will have a budget of $2.5 million.

Now that Campbell has been chosen to lead the review, a final report is expected by the end of next year.

Campbell is the chief executive officer of Hawksmuir International Partners. He was premier of British Columbia from 2001 to 2011, and served as Canada’s high commissioner to Great Britain from 2011 to 2016.