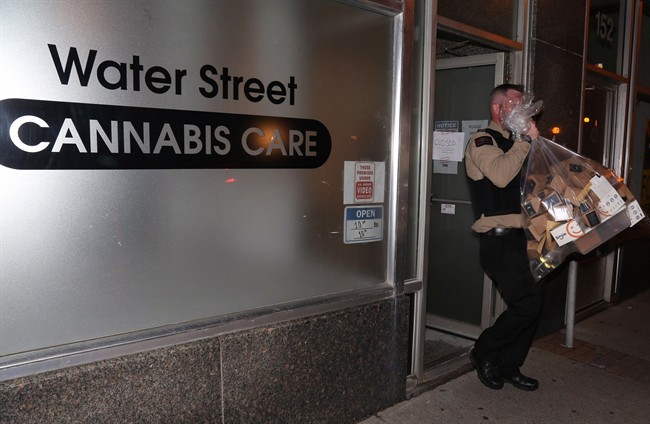 Cannabis Care, an unlicensed cannabis dispensary in St. John’s N.L. was raided by the RNC and inspectors from the Newfoundland and Labrador Liquor Corp on Thursday, October 18, 2018. The downtown store which opened earlier this year was not approved to legally sell cannabis. (THE CANADIAN PRESS/Paul Daly)

PORT ALBERNI, B.C. – The managers of two pot shops on Vancouver Island where police seized thousands of dollars worth of marijuana say the British Columbia government failed them by only approving one store in the province before legalization as raids were reported on both ends of the country.

The RCMP say they entered the Port Alberni Cannabis Club at around 11 a.m. Wednesday, before visiting Leaf Compassion Cannabis Dispensary around 2 p.m., and found both stores were open without provincial licences.

Police gave the store no warning in the weeks or days before the raid, said general manager Christine Jarvis, and she blamed the province for not approving her licence application in time for legalization on Wednesday.

“I feel violated. They had enough time to do this,” she said, adding it’s been three years since Prime Minister Justin Trudeau signalled his intention to legalize marijuana.

“It’s literally all the government’s fault with not having applications ready on time,” he said. “Everybody filled them out in time, but the government didn’t give them back in time for legalization.”

On the other side of the country, a dispensary in St. John’s was raided Thursday by police and inspectors from the Newfoundland and Labrador Liquor Corp.

“At this point, all I can say is that a warrant was executed early this evening at that location,” said Greg Gill of the liquor corporation, declining to comment on possible charges.

Police and liquor inspectors had cleared the downtown dispensary by 10 p.m. local time, after bagging and tagging everything inside.

Officers seized cannabis products from both locations in Port Alberni, B.C., and issued the owners violation tickets for the unlawful sale of marijuana, the RCMP said in a statement.

“In accordance with the new legislation and regulations, cannabis is to be sold exclusively at government-run stores, licensed private retailers, and the B.C. government’s online store,” the statement said.

“While the legal recreational use of cannabis may be new, the enforcement of laws around the illegal production, distribution and consumption of cannabis is not.”

It’s unclear whether the raids in B.C. were the first in Canada after marijuana was legalized.

Sgt. Janelle Shoihet said she was not aware of any other raids by the Mounties in British Columbia. The RCMP’s national headquarters said it could not provide a response Thursday on whether there’d been other similar enforcement by the Mounties in other parts of Canada.

The federal government gave the provinces and territories the authority to licence retail stores ahead of marijuana becoming legal on Wednesday. At this point, B.C. only has one licensed location — a government-run store in Kamloops in B.C.’s Interior — and an online store.

Both the Port Alberni Cannabis Club and Leaf Compassion Cannabis Dispensary hold municipal business licences and paid a $7,500 fee as part of their application for provincial licences.

Jarvis said the Mounties seized everything that was visible in the store, totalling about $10,000 worth of product, and issued her a $575 ticket.

Her customers are primarily older medical users who come for edibles, concentrates and other products that keep them off pain relievers and sleeping pills, she said.

“We have no access to get to Kamloops. We’d have to take a ferry and everything. Online, you have to have a credit card and wait two to four days shipping,” she said.

“It’s unreasonable to ask anyone in smaller towns to even bother trying to go that route. So now, they can’t even get it.”

Public Safety Minister Mike Farnworth advised illicit dispensaries to shut down before Wednesday and wait to receive provincial approval. The province did not immediately respond to a request for comment on Thursday.

On Wednesday, he said part of the delay in opening stores was because of the province’s promise that local governments will get to make the final decision about pot outlets in their communities. Many municipalities are waiting for Saturday’s local elections before proceeding, he added.

A Ministry of Attorney General spokesman said Thursday that legislation prevented the province from issuing a retail store licence until federal legalization came into force, but he did not elaborate on which legislation the province was referring to.

Newfoundland and Labrador and New Brunswick each had 20 stores open on Wednesday, while Alberta had 17.

Vesaranta, said his store serves scores of medical users who consider marijuana to be akin to their prescription medication.

“People are coming in here like, ‘Where do I go now?’ … They’re like, ‘I haven’t been to a black market dealer for two or three years,'” he said.

“It leaves them with nowhere to get medicine.”

There are 186 paid applications being processed in the province, including 73 that have been sent to municipal governments for final approval.

Earlier this week, Vancouver Chief Const. Adam Palmer, who is also president of the Canadian Association of Chiefs of Police, said raids of unlicensed pot shops on Day 1 of legalization were “highly unlikely.” He said police would take a “common-sense, pragmatic approach.”