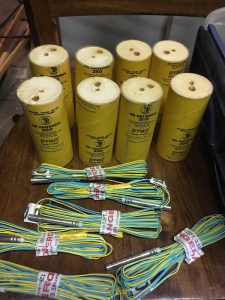 Explosives found during a search of a Thompson home on Monday, October 22, 2018. (RCMP HANDOUT)

RCMP in Thompson, Manitoba have charged two residents after coming across a haul of illegal items on Monday, including explosives.

Police executed a search warrant at the home in the Westwood area of the community at around 2 p.m.

Officers found a number of suspected mining explosives, 14 firearms — one of which was loaded — cocaine, drug paraphernalia, and cash.

The scene was secured and the explosives were safely removed from the property.

Shawn Gelasco, 43, and Ruth Gelasco, 41, both from Thompson, have been charged with possession of explosives and property obtained by crime, as well as three counts of unsafe storage of a firearm.