Two Dead as Winnipeg Home Engulfed by Flames and Smoke 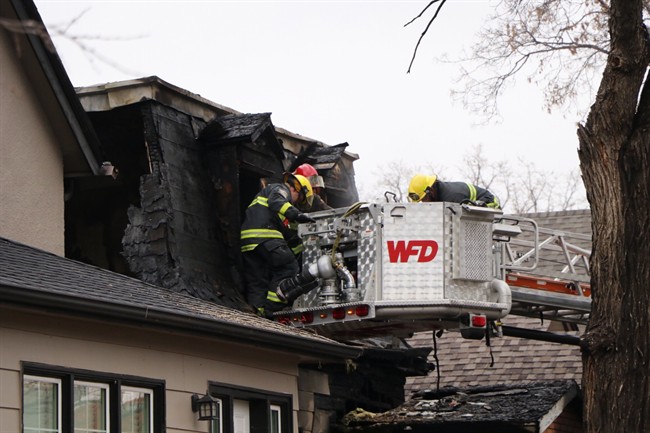 Winnipeg fire fighters respond to a house fire in Winnipeg on Friday, Oct. 26, 2018. Police say their major crimes unit is investigating after two people were found dead following an overnight house fire in Winnipeg. Emergency officials say the two-storey home was engulfed in flames and smoke when firefighters arrived at the scene in the central Point Douglas neighbourhood shortly before 2:30 a.m. (THE CANADIAN PRESS/Kelly Malone)

WINNIPEG — Two people are deceased after a fire in a two-storey home on Prince Edward Street overnight.

Crews arrived just before 2:30 p.m. to the Point Douglas neighbourhood to find the building fully engulfed with significant flames and smoke on all levels.

Two people self-evacuated prior to emergency crews arriving. A 60-year-old woman was taken to hospital in critical condition, while a 17-year-old male youth is listed in unstable condition. Officials say two other people inside didn’t make it out.

“The house was totally involved in fire. It was a defensive fire right from the get go… to make entry was impossible,” said district fire Chief Wally Hergeshiemer.

Once the fire was under control, the victims’ bodies were removed from the home through a second-storey window.

“It’s a slow, tedious process but we have to do it also in a respectful way, not only to the victims but to the families of the victims,” Hergeshiemer said.

In a separate fire Thursday evening on Maryland Street, one firefighter was taken to hospital while responding to a vacant two-storey apartment block.

Crews found the second floor to be engulfed at around 7:30 p.m. and quickly extinguished it.

The condition of the firefighter in hospital isn’t known at this time.