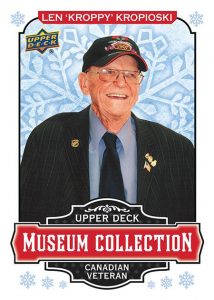 Late Winnipeg Jets fan Len “Kroppy” Kropioski has been given a tribute of having his face on the front of a special edition Upper Deck hockey card.

The Winnipeg-born Second World War veteran passed away in 2016 at the age of 98.

Kroppy was a familiar face at Winnipeg Jets’ home games, making the drive from his home in Kenora, Ontario to give the on-camera salute during the national anthem.

Kropioski appears on the “Museum Collection” hockey card, scheduled for release on November 10. A second card in the collection features Ronald Rosser, an American Veteran who was awarded the Medal of Honour.

The cards will be available at select retailers in Canada and the U.S. Veterans can receive a copy for free on November 10 and 11.