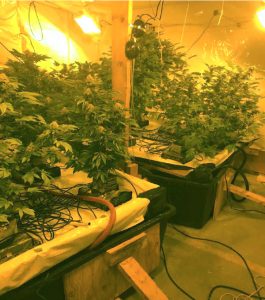 RCMP have charged a man in connection to a marijuana grow-op in Winnipegosis, Manitoba on October 19, 2018. (RCMP HANDOUT)

Manitoba RCMP have seized 94 marijuana plants from a home in Winnipegosis.

Officers executed a search warrant at a home on Bridge Street in the community on October 19, when they came across a large illicit grow operation.

Ronald Allan Sobotkiewicz has been charged with numerous drug offences.

Since cannabis became legal on October 17, police have laid 12 charges relating to unlawful transport, two charges for consuming cannabis in a vehicle, and consumption of cannabis by a young person. RCMP have also charged someone with selling cannabis to a 16-year-old and another with being impaired by the drug.

Under the Liquor, Gaming and Cannabis Control Act, Manitobans aren’t allowed to grow their own cannabis and can only obtain it through approved distributors. To transport cannabis in a vehicle, it must be secured outside the passenger compartment, or under the furthest seat away from the driver in a van or SUV.