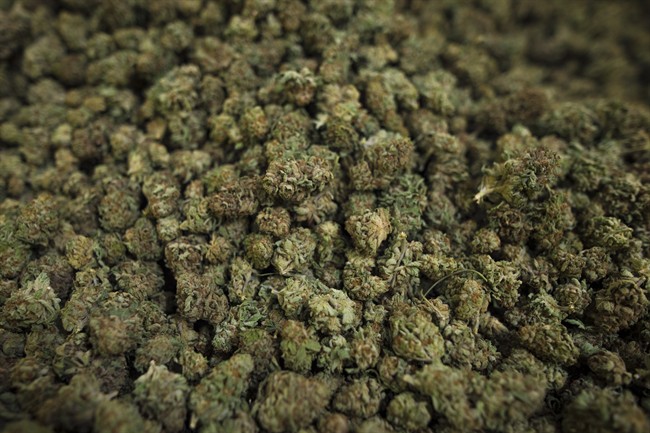 Cannabis harvested at the CannTrust Niagara Greenhouse Facility in Fenwick, Ont., is photographed on Tuesday, June 26, 2018. A Manitoba community that only allowed bars in 2011 has voted no to letting pot stores open up shop. (THE CANADIAN PRESS/ Tijana Martin)

When the provincial government announced earlier this year what taxes would be applied to recreational cannabis sold in the province, RST wasn’t on that list. Sales of the drug are subject to levies applied by Manitoba Liquor and Lotteries, which include markups of $0.75 per gram, plus an additional nine percent. Retailers also have to pay a “social responsibility fee,” amounting to six percent of their revenues. There is also a federal tax, which will be split between the provincial and federal governments.

Despite all these taxes, the decision was made to not include RST because the provincial government was worried about high prices. Unlike most other products, legal weed is competing against a well-established black market which isn’t subject to taxes and levies. In August, Families Minister Scott Fielding was quoted by the CBC, saying that their priority is to eliminate the black market. RST continues to be charged on the sale of medical marijuana.

I support the purchase of necessities being RST exempt and I have few issues with legal cannabis, but I don’t believe its sale should be exempt from sales taxes. Especially not when the relatively recent addition of RST to previously exempt items, such as insurance, impact the province’s competitiveness.

The applicable taxes and levies already make legal cannabis much more expensive than that bought on the black market. The Leaf, the Winnipeg Free Press’ cannabis-centred news site, compiled data about prices across Canada on October 17. They found the lowest price in Manitoba was $11/gram. For the provinces where there was data, this is the third highest price in Canada. Following legalization, many customers switching from the black market commented on the price difference, reported to be as much as double what they were used to paying.

Regardless of the rhetoric, the legalization of cannabis is an important new revenue stream for governments. If the goal really were to eliminate the black market, the government could have acted like the big player they are — using low prices and policing to drive the black market out of business. The levies and fees are to help cover health care costs and addiction services, but the government already pays these; by effectively pushing the black market out, they would cut down on the health costs associated with tainted drugs as well as reduce costs associated with people being “upsold” the harder drugs that black market sellers will have to shift their business towards. With a weakened black market, taxes and levies could resume.

If it were really about cutting out the black market and not raking in revenue, Manitobans would be allowed to grow their own cannabis, something that the federal legislation allows.

For the bulk of those who will consume cannabis now that it’s legal, I don’t think the price is the issue. Instead, it will be safety and convenience, and these can really only be provided by legal resellers. The regular users will likely stick with “their guy,” but I predict we’ll see something similar to what we saw with file sharing. Once it became easy to buy movies and music digitally online, people were happy to pay for something that was convenient, legal and posed no threat of infecting their computers.

We are at the tip of an iceberg, in uncharted waters when it comes to legal cannabis. I don’t think the black market will ever be stomped out — it remains for tobacco and alcohol, but I think the legal market will win out. The government just needs to decide how that will happen, and over how long.