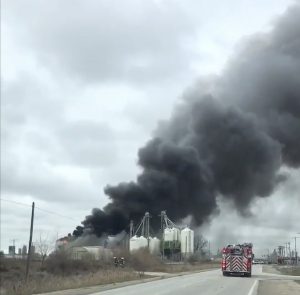 Black smoke billows out of a fire at Friendly Family Farms in St. Boniface on Monday, November 5, 2018. (@ROXYF40 / TWITTER)

WINNIPEG — A fire at an industrial building in St. Boniface sent thick black smoke into the air on Monday.

All three people inside the plant were able to make it out safely, but one was treated for smoke inhalation, officials said.

The Winnipeg Fire Paramedic Service deployed 22 apparatus to the scene, including a drone. Crews fought from a defensive standpoint as flames and smoke forced firefighters to remain on the outside of the building, which is now considered to be a total loss.

The city says essential crews remained on the scene throughout the night as machinery started demolishing it. A smaller complement of crews remained on scene Tuesday morning monitoring for and extinguishing those hot spots.

Dawson Road remains closed and will not be accessible during the morning drive.

A cause of the fire and a damage estimate aren’t yet available. 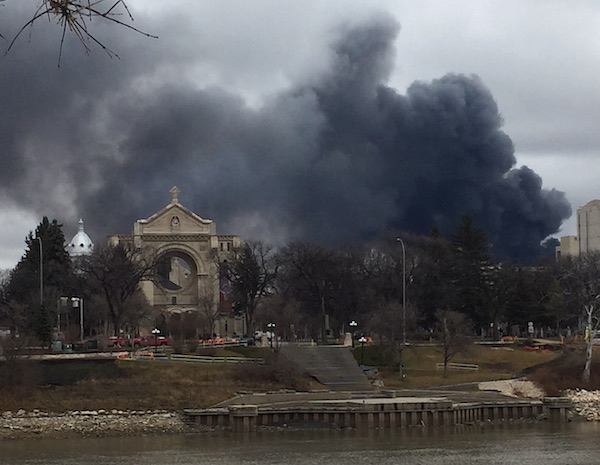 Smoke from the St. Boniface industrial fire could be seen across the Red River near The Forks on Monday afternoon. (BARBARA CHABAI / SUBMITTED)

Working fire in St. Boniface as seen from the 25th floor of the Richardson Building @CBCManitoba @ctvwinnipeg @globalwinnipeg pic.twitter.com/Uw6WQXkxcb

Friendly family farms on fire in Winnipeg by Dawson rd traffic has been blocked off pic.twitter.com/nMvi8BtzCP