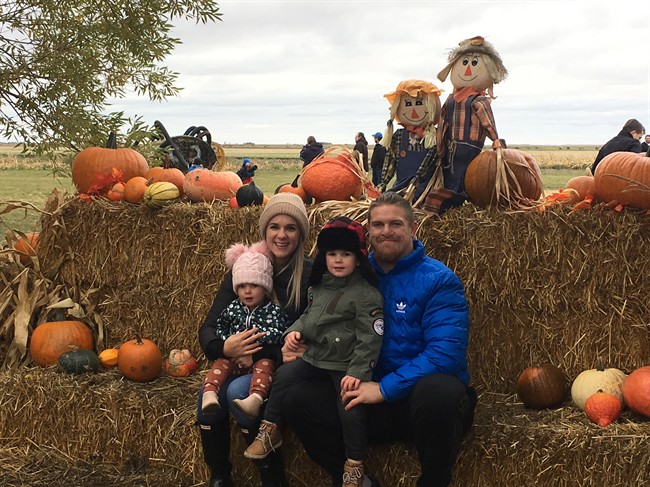 Winnipeg Blue Bombers Adam Bighill, wife Kristina, son AJ and daughter Leah are shown in a handout photo. Bighill has displayed his leadership on and off the field in his first season with the Blue Bombers by helping his teammates reach the playoffs and showing local kids with facial differences that they can achieve anything they want. (THE CANADIAN PRESS/HO-Adam Bighill)

WINNIPEG – Adam Bighill is happy and satisfied every time he hauls down a quarterback or knocks the ball out of an opponent’s hands.

But those feats don’t top the list of accomplishments for the Winnipeg Blue Bombers middle linebacker, who was voted the CFL team’s most outstanding player and top defensive player. Helping shy children with facial differences look people in the eye, smile and speak confidently is what makes him as proud as any of his football achievements.

“In a sense, sometimes it’s even more because you’re really affecting these kids’ lives,” said Bighill, who was born with a bilateral cleft lip and palate.

Before the Bombers (10-8) began practising Wednesday for Sunday’s West Division semifinal in Regina against the Saskatchewan Roughriders (12-6), Bighill spoke to The Canadian Press about his first season with the club.

When he was signed by Winnipeg in May after being released by the NFL’s New Orleans Saints, his character was praised along with his talent and tenacity.

He delivered on the field, collecting 105 tackles with four sacks, four forced fumbles and two interceptions, one he returned for a touchdown.

Off the field, he tried to make an impact in his new city.

During Winnipeg’s first bye week, Bighill took part in a local workshop put on by Making Faces, a Toronto-based non-profit organization that supports children with facial differences and anti-bullying programs. He’s been on the board since 2015, when he played for the B.C. Lions.

About 20 kids brought together by a similar national charity called AboutFace listened to Bighill and Making Faces founder Michael Williams-Stark talk about their personal experiences. The pair then led the kids through some improvisation, comedy and games.

“We kind of get kids to open up and be able to build on different skills that a lot of kids with facial differences need work on — with eye contact, projecting your voice, being confident and communicating,” Bighill said.

“By the time you’re about halfway through, you realize that these kids are already making big strides.”

Bighill, 30, grew up in Montesano, Wash., and had five surgeries before he was 12.

His parents, Andy and Janine, were always there to support and encourage him.

His mom unexpectedly passed away when he was 15 from a heart attack while recovering from surgery. His dad, who’s been to Winnipeg to watch some Bombers games, always told him he could do anything. That certainly held true for sports.

“A lot of that confidence came from just really kind of excelling in the sports I was playing and being one of the best athletes around in whatever I competed in,” he said, adding that earned respect and cut down on the bullying.

He met his wife, Kristina, while playing for the Lions through a friend of hers who worked for the team. They went out for ice cream on their first date and his facial scar didn’t jump out at her.

“There was no issue with it at all,” she said. “It was just part of kind of who he is, what his story is.

“He was just so nice, so easy to talk to. Definitely opposite of the on-field Adam.”

She hasn’t watched her husband at workshops, but knows how much he values helping kids.

A teenage boy in Hamilton with a cleft lip and palate has followed his career since he entered the CFL with B.C. in 2011, she said. Whenever he’s in Hamilton, he has breakfast with the boy and his father. He also stays in touch with the teen to see how he’s doing in school and sports.

“It’s super sweet,” Kristina said. “He uses his platform, I think, really well and is able to reach out to those kids who have gone through a similar story of what Adam has gone through.”

The couple has enjoyed their first season in Winnipeg, feeling welcomed by the organization and the players and their wives and girlfriends.

Bighill, who signed a one-year contract, said his family will be the top priority when he decides his future. His agent hasn’t started negotiations with the Bombers.

“We’re just trying to focus on the season and finish this thing off with a Grey Cup,” he said.

“Things will just take care of themselves as time comes along. It’s not something that I feel like we need to rush into immediately and really waste energy now focusing on it. I think that energy is better spent focusing on the here and now.”