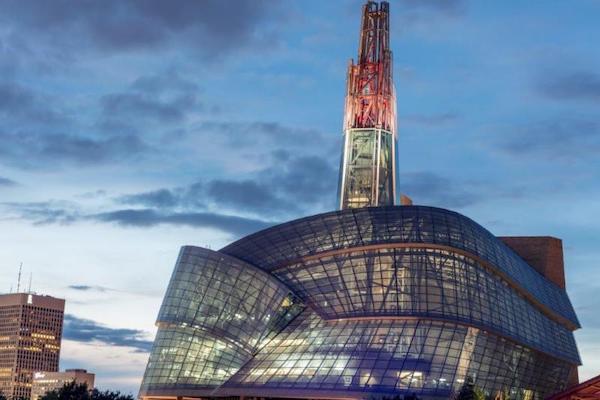 The Canadian Museum for Human Rights will glow red this weekend in honour of Remembrance Day. (AARON COHEN PHOTO)

WINNIPEG — The Canadian Museum for Human Rights will turn its tower poppy red this weekend in honour of Remembrance Day and the 100th anniversary of the Armistice that ended the First World War.

CMHR will also waive admission to veterans and active serving members of the Canadian armed forces and their families on November 9-11. The offer extends to a total of two adults and four youths.

On Remembrance Day, the museum will also screen a documentary at 1 p.m. about the internment of thousands of men, women and children in Canada during the First World War.

First World War internment is also the subject of a six-minute, silent video documentary that plays on a 27-metre digital canvas above the Canadian Journeys gallery in the CMHR.

← Previous: Home with a Heart: Meet the Family Behind Winnipeg's HSC Lottery Home Next: Child, 4, Dies When Struck by Car on Driveway in RM of McCreary →
Tags: Canadian Museum for Human Rights | Remembrance Day | Winnipeg