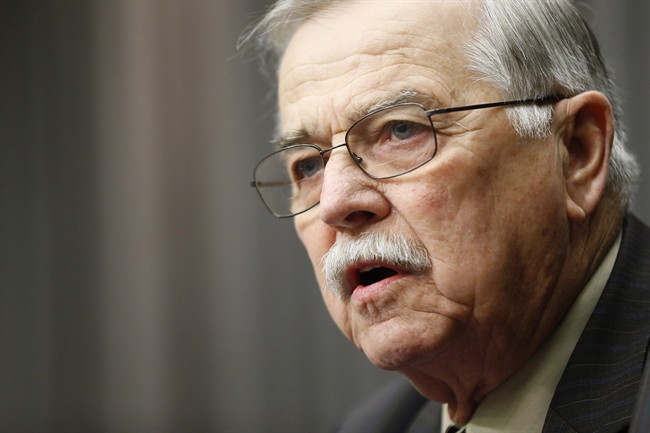 Cliff Graydon, Manitoba MLA for Emerson who was kicked out of the Manitoba PC government’s caucus for inappropriate comments to staff, speaks at a press conference in Winnipeg, Manitoba Thursday, November 8, 2018. Graydon spoke about his political future, legislative issues and priorities moving forward. (THE CANADIAN PRESS/John Woods)

WINNIPEG – A Manitoba legislature member who was booted from the governing Progressive Conservative caucus over inappropriate remarks said Thursday he is not a sexual harasser, but later admitted some of his comments could be construed as harassment.

Cliff Graydon, 72, described himself as a product of a bygone era as he answered questions for the first time since being ejected by the Tories last month.

“People who know me best can verify I have never been accused of anything remotely resembling sexual harassment,” Graydon said at a news conference.

“I admit I’m guilty of having of having a bad sense of humour and sincerely apologize to those who have been offended by my inconsiderate jokes. I have grown up in a different era and realize some people today are much more sensitive to inappropriate humour.”

Graydon was kicked out of caucus last month after media reports he invited two junior staff members to sit on his lap and invited one to lick food off his face. Caucus chair Wayne Ewasko said Graydon had exhibited a “pattern of inappropriate behaviour,” but would not reveal details.

Graydon said Thursday he has no memory of asking anyone to lick his face and feels the lap incidents were misreported.

“I have never asked anyone to sit on my lap — that’s a media term. The comment was ‘You can sit on my knee or I can get you a chair’.”

Graydon was asked whether he considers that statement harassment.

Graydon said his inappropriate actions never involved touching, but there may have been many more cases of verbal comments.

“There could be many in my past. I have no idea, with my sense of humour.”

Graydon said he will sit as an Independent and will not run for re-election in 2020. He was first elected in 2007 and represents the Emerson constituency — an area where asylum-seekers have been crossing the United States border on foot to gain entry into Canada.

Graydon stirred up controversy last winter when he called the asylum-seekers “a drain on society.” He also retweeted other people’s posts that called Prime Minister Justin Trudeau a traitor, a scumbag and a disgrace.

Graydon apologized at the time, deleted the tweets and agreed to undergo sensitivity training, the details of which were never made public.

“I learned a lot from my sensitivity training,” Graydon said.

“But like I said, I came from a different era and it does take time to change. You do slip sometimes.”