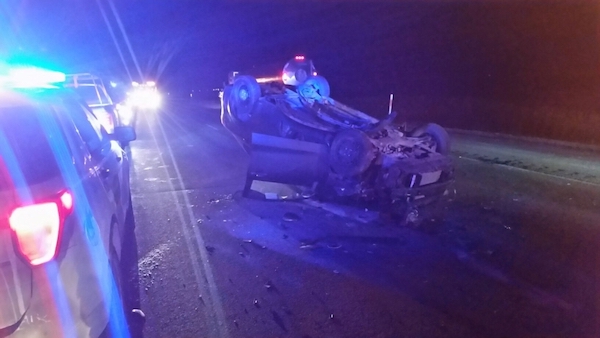 A vehicle collided with an RCMP cruiser west of Winnipeg on Highway 1 Wednesday evening and rolled. (RCMP HANDOUT) 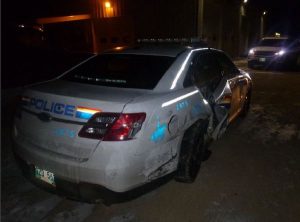 An RCMP cruiser and an SUV were both hit when a vehicle lost control approaching a traffic stop Wednesday night. (RCMP HANDOUT)

Two RCMP vehicles were stuck while conducting a traffic stop west of Winnipeg on Wednesday night.

Officers were responding to a report of an impaired driver on Highway 1 just east of Elie, Manitoba at around 6:25 p.m.

The first cruiser to arrive located two vehicles on the lefthand shoulder of the westbound lane. Police pulled up behind the two vehicles, which contained the suspected impaired driver and a witness.

Police placed the driver of the first vehicle into the back of a police SUV, while a second police officer pulled in behind the SUV. RCMP say when that officer exited his vehicle and approached the witness, a westbound car collided with the passenger side of his police car, which then collided with the police SUV.

The officer and the 28-year-old Winnipeg driver, who was seated in the SUV, weren’t injured.

The 82-year-old Elie man driving the car that caused the collision is facing charges under the Highway Traffic Act. His vehicle ended up on its roof, but the driver was wearing a seatbelt and wasn’t injured.

“Here is a perfect example of the dangers we face on a daily basis when we conduct traffic stops and why we stress the importance of drivers needing to slow down and move over,” said Sgt. Paul Manaigre of the Manitoba RCMP.

“Thankfully, these officers and the members of the public walked away uninjured. This could have been so much worse. I can’t stress enough how important it is for everyone to slow down and move over. This is law, and it is there for a reason.”