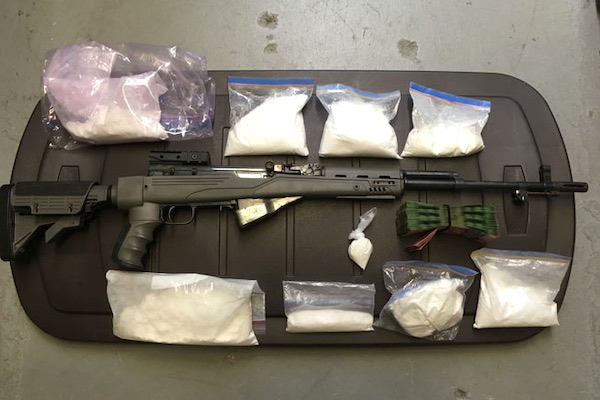 Drugs and a firearm seized as part of a search of two homes in Thompson, Manitoba on Monday, November 12, 2018. (RCMP HANDOUT)

Six people are in custody facing several drug-related charges and other offences after RCMP in Thompson, Manitoba executed two search warrants on Monday.

Police in the community searched two separate homes throughout the day, seizing drugs and weapons.

The first residence on Caribou Road is where police seized approximately 947 grams of cocaine, an SKS high powered rifle, ammunition, crossbow and arrows, and other drug paraphernalia.

Another residence on Pipe Road turned up approximately 478 grams of cocaine, a large sum of Canadian currency and other drug paraphernalia.

Six people, ranging in age from 24 to 42, face numerous charges relating to the seizures. They all remain in custody.