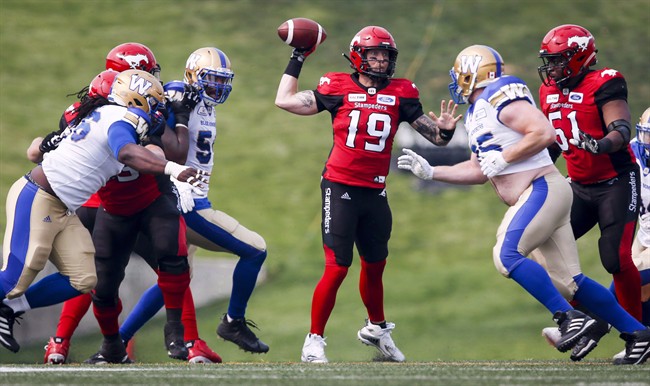 CALGARY – There were no silver linings or time-worn sports platitudes in the Winnipeg Blue Bombers dressing room Sunday evening after the team lost a defensive struggle to the Calgary Stampeders in the CFL Western Final.

Calgary won 22-14 and earned a ticket to Edmonton next week for a Grey Cup matchup with the Ottawa Redblacks.

“I’ve never felt like this in my life after a loss. We have something special here and I know it’s never gonna be the same,” said Winnipeg running back Andrew Harris.

“That’s the part that hurts the most. I just love this group of guys and I wanted nothing more than to win a Grey Cup with this group. I’m sad, man, really sad. It’s more than just football.”

Harris, the CFL’s leading rusher, was held to 71 yards in the game. He credited the play of the Calgary defence and didn’t see the Bombers’ success this year — third in the West with a 10-8 record and reaching the Western final — as any kind of positive to build on for next season.

“I can’t think about next year. I’m just in the moment right now.”

The Bombers haven’t won the Grey Cup since 1990. Winnipeg lost the CFL West final to Edmonton in 2002 and won the CFL East final in 2011 before losing to the B.C. Lions in the Grey Cup.

Bombers quarterback Matt Nichols struggled against the Calgary defence, completing less than half his passes and throwing for just 156 yards in the game.

“It sucks man. They did a hell of a job. We had a lot of opportunities and of course Calgary’s defence… they played great tonight and it’s difficult,” Nichols said.

“You go into a game like this with no doubt that you’re going to win and when you don’t it’s a pretty terrible feeling.”

Head coach Mike O’Shea said his team played well but just not as well as the Stamps. He said it’s too soon to attempt to give his players a pep talk about the future.

“It’s too raw. Stick their chest out and pick their chin up and let’s talk about it tomorrow,” he said.

“They’ve been on a hell of a journey, all got better and evolved, grown stronger. I believe they really became a team.”

Defensive back Chris Randle said his biggest disappointment is that there will be some sort of player changes next year and the 2019 Bombers will be different.

“You don’t think about it beforehand. It only hits you now. The reality is teams aren’t the same. Every year it changes. The bargaining agreement will change things. Free agency, with the dollars we have, that’s going to change things,” Randle said.

“To let an opportunity like this…we fought hard all season long. We’re supposed to be here in this moment. We had everything we needed to try to capitalize on this opportunity. We fell short.”