‘The Queen is in Good Company:’ New $10 Bill with Civil Rights Advocate Launched 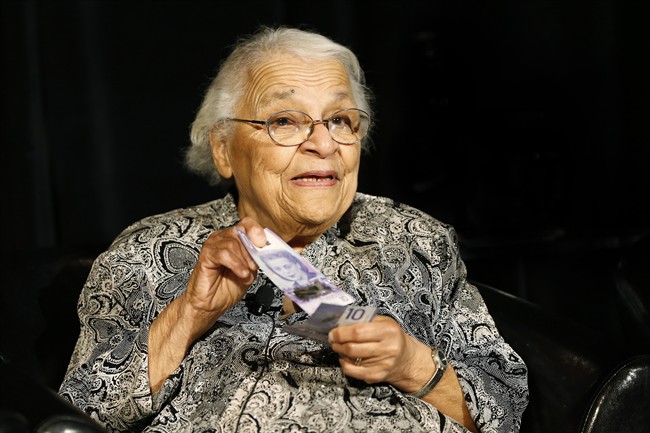 The banknote is the first vertically oriented bill in Canada and the first regularly circulating banknote to feature a Canadian woman, civil rights advocate Viola Desmond, on the front.

“The Queen is in good company,” Desmond’s 91-year-old sister Wanda Robson said with a smile at the bill’s official launch held at the Canadian Museum For Human Rights on Monday.

Desmond was arrested after refusing to leave a whites-only section of a theatre in New Glasgow, N.S., in 1946.

It was 63 years later — after Desmond’s death — that the Nova Scotia government issued an apology and pardon.

“It is one thing to accomplish great things when the wind is at your back, but another altogether when society is set up to sit you down,” John Young, chief executive officer of the Canadian Museum For Human Rights, said at the launch ceremony at the museum.

The museum itself is featured on the back of the bill, and the banknote has other human rights elements — an excerpt from the Canadian Charter of Rights and Freedoms, and an eagle feather that the Bank of Canada says is in recognition of the rights of Indigenous people.

Young recounted coming across a Grade 8 student at the museum who saw a picture of Desmond and thought it was Rosa Parks — a United States activist who was arrested for not giving up her bus seat to a white man almost a decade after Desmond’s arrest.

To Young, it was a sign Canadians need to learn more about their own history.

“I hope as more Canadians get to know Viola Desmond, they will also learn the other stories of racism, oppression and injustice that mark Canada’s own human rights journey. Achieving rights for all is a process and we are not there yet.”

Desmond was selected to be on the bill after an open call for nominations and a public opinion survey on the Bank of Canada website.

Robson said her sister would be proud to see the new currency.

“She would say, to herself, ‘Well it’s about time that somebody recognized what I did and what so many other people did in their own way,’ ” Robson said.