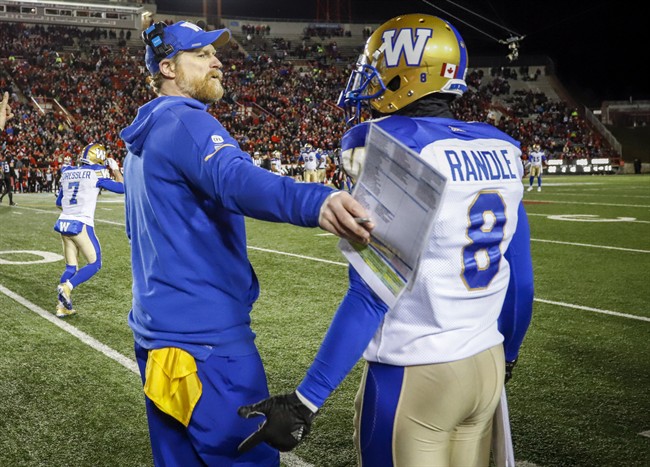 In Sunday’s CFL West final, television cameras caught an emotional Dickens on hollering at the officials about some calls, questioning why they were taking place in front of O’Shea and then saying “(expletive) Canadian.”

Speaking Monday as the Bombers cleaned out their lockers following the 22-14 loss in Calgary, O’Shea made light of the incident.

“Well, I’m a proud expletive Canadian,” O’Shea quipped. “Him and I have already spoken.

“Things get (said) in the heat of the battle. It really is a heat-of-the-moment type of thing and I’ve got a good relationship with Dave.”

Asked what was said in their conversation, O’Shea said “That’s between him and I. I’ve got a lot of respect for Dave.”

O’Shea doesn’t sound as if he’ll be holding any grudges.

“But in terms of that, you know, I’m sure things get said.

Dickenson, who hails from Great Falls, Mont., apologized for the comment and said it had noting to do with Canadians in general.

“Lesson learned, I apologize to anyone,” Dickenson said Monday in Calgary. “I texted Mike afterwards, I texted him. It had nothing to do with him personally, by the way, I just felt the calls were coming out on their sideline as some calls come out on my sideline.”