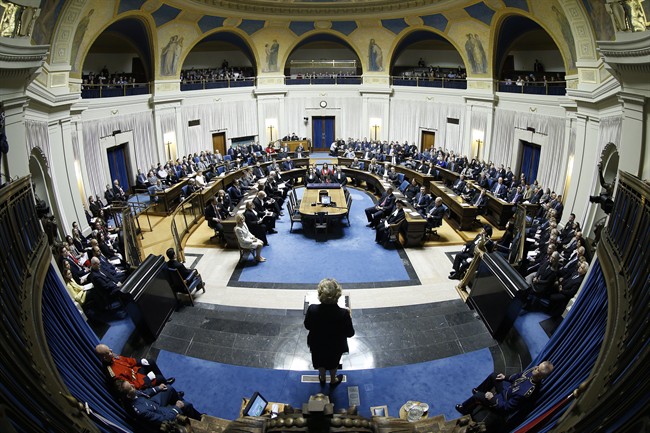 WINNIPEG – Manitoba’s Progressive Conservative government is temporarily halting any expansion of gambling in the province and promising to move more people off welfare and into the workforce.

The government’s agenda for the coming year, laid out in its throne speech Tuesday, also includes plans to toughen penalties for impaired drivers and to simplify taxes and royalties for the oil and gas sector.

Premier Brian Pallister said until a review of the province’s gaming strategy is complete there will be no new casinos or other gambling outlets.

“I personally am not a big fan of gambling and I know it has hurt people,” Pallister said.

“It’s important to understand (that) although it obviously generates revenue for the coffers of government on the one hand, there are real social costs on the other side. So having a look at that, and having a look at where and how we do our gambling in Manitoba is important.”

The Tories said their new plan to move people off welfare will reduce poverty.

“In the past, assessments of employable Manitobans on assistance were informal, non-standardized, inconsistent and often delayed,” stated the throne speech, read in the legislature chamber by Lt.-Gov. Janice Filmon.

“A new approach will feature more timely and holistic assessments … and more rapid connections to supports to rejoin the workforce sooner.”

Pallister said there will be help for people making the transition, but Opposition NDP Leader Wab Kinew said the government appears focused only on the bottom line.

“The concern that I have with this government … is what we’ve seen in other areas — a focus only on cost-cutting measures and not actually on adding supports,” Kinew said.

Drivers with a blood-alcohol level slightly below the legal limit can expect to face roadside licence suspensions and other penalties. Justice Minister Cliff Cullen said Manitoba is going to adopt measures enacted by British Columbia several years ago.

There will also be a comprehensive review of taxes and royalties on energy production “with a goal of simplifying the tax and royalty structure,” and colleges will have performance-based funding.

The government is promising new consumer protection against high-pressure sales tactics and new supports for victims of domestic violence as they deal with the court system.

As with most throne speeches, the document discusses plans in broad terms. Details are expected on each item in the weeks to come.

Winnipeg Mayor Brian Bowman said the throne speech briefly mentioned the growing problem of methamphetamine addiction and the province needs to step up.

“It is a crisis, including here in the City of Winnipeg,” Bowman said.

“Many of those underlying conditions are provincial — they’re health-related, they’re housing-related. The City of Winnipeg and our police service can’t arrest their way out of the meth crisis.”

The throne speech does not include any big-ticket spending items. Pallister is past the halfway point in a mandate that has focused on fiscal restraint, including wage freezes for public-sector workers and job cuts in Crown corporations.

The Tories have promised to cut the provincial sales tax by one percentage point in 2020 and balance the budget by 2024. The deficit for the fiscal year that ended in March came in at $695 million.

— No expansion of the gambling industry pending a government review

— Simplified taxes and royalties for the oil and gas sector