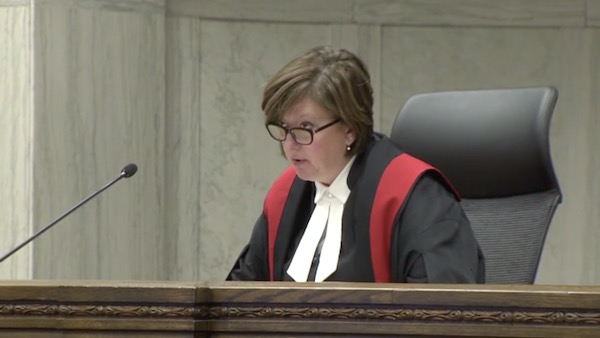 Judge Tracey Lord delivers her verdict in a Winnipeg courtroom during the sentencing for mail-bomber Guido Amsel on Thursday, November 22, 2018.

WINNIPEG – A Manitoba judge on Thursday called a man who sent letter bombs to his ex-wife and two law firms callous and vengeful as she sentenced him to life in prison with no chance of parole for 10 years.

Guido Amsel, who was convicted earlier this year on four counts of attempted murder, was also sentenced to an additional 12 years for an earlier attempt on his ex-wife’s life.

Amsel, 52, sent letter bombs in the summer of 2015 to his former wife, Iris, and two Winnipeg lawyers who represented her.

One of the devices went off and severely injured lawyer Maria Mitousis, who lost her right hand in the explosion.

“The physical impact of the explosion has been life-changing in many ways for Ms. Mitousis, ways that according to her she deals with every waking moment,” provincial court Judge Tracey Lord said Thursday.

Amsel’s plan was calculated and was executed with cold deliberation, Lord said. It showed an indiscriminate disregard for the lives and safety of others, she added.

Amsel testified during his trial that he was being set up by his former wife and others, and that evidence had been planted against him.

Lord said Amsel has not accepted responsibility or shown any remorse for the attacks that put many people at risk.

“Moreover, he has attempted to place responsibility on others for these offences, and alleges corruption at all levels of the justice system.”

In December 2013, a bomb went off in the community of Narol, Mba., northeast of Winnipeg, where Amsel’s ex-wife was living. There was damage to the property, but no one was hurt.

The bomb that injured Mitousis on July 3, 2015, was placed in a recording device. A note attached to it instructed her to press the enter button, which set off the explosion.

Over the following days, two more bombs were found — a second one sent to Amsel’s ex-wife and another to lawyer George Orle. The explosives were intercepted by police.

“The proper discharge of their professional responsibilities within the justice system was taken and distorted by Mr. Amsel to fit neatly into the conspiracy he already believed about his ex-wife, and resulted in what can only be described as a personal vendetta against them.”

Mitousis, who was present for the sentencing but declined to comment afterwards, told court in her victim impact statement earlier this year that Amsel’s actions were that of a coward. She said that after he was sentenced, she would move on with her life, continue her return to work and put Amsel behind her.

“After this is over, I will forget him and he will disappear from my consciousness.”

A woman who declined to give her name but said she was Amsel’s wife wept in the hallway after he was sent to prison. Surrounded by a handful of people, the woman said Amsel wanted to appeal the sentence, but she alleged no lawyer in Manitoba would help him. She said they have been in contact with legal representation in British Columbia.

WATCH: Replay of Amsel’s sentencing below.