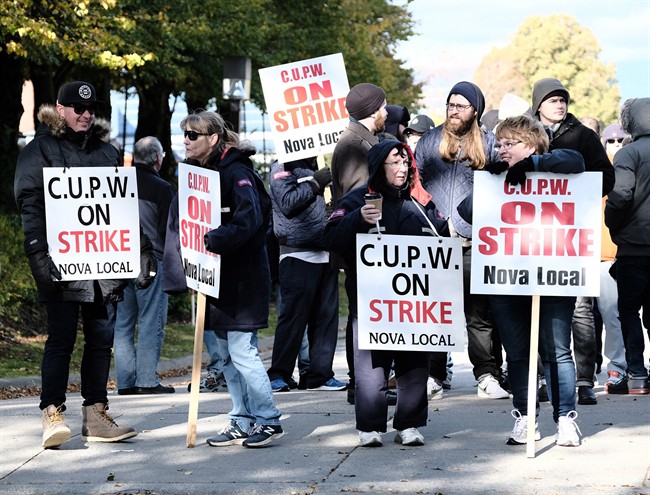 Canadian Union of Postal Workers (CUPW) members stand on picket line along Almon St., in front of the Canada Post regional sorting headquarters in Halifax on Monday, Oct.22, 2018 after a call for a series of rotating 24-hour strikes. (THE CANADIAN PRESS/Ted Pritchard)

OTTAWA – The Senate is holding a rare Saturday sitting to debate legislation that would order postal workers back to work.

The bill passed the House of Commons during a special session early Saturday morning by a vote of 166 to 43.

Senators are sitting on Saturday, and on Sunday if necessary, to deal with the bill, which will go into effect at noon eastern time on the day following royal assent.

Members of the Canadian Union of Postal Workers have held rotating walkouts for a month, causing massive backlogs of unsorted mail and packages at postal depots.

Canada Post says it could take weeks — even stretching into 2019 — to clear the backlog that has built up, especially at major sorting centres in Toronto, Montreal and Vancouver.