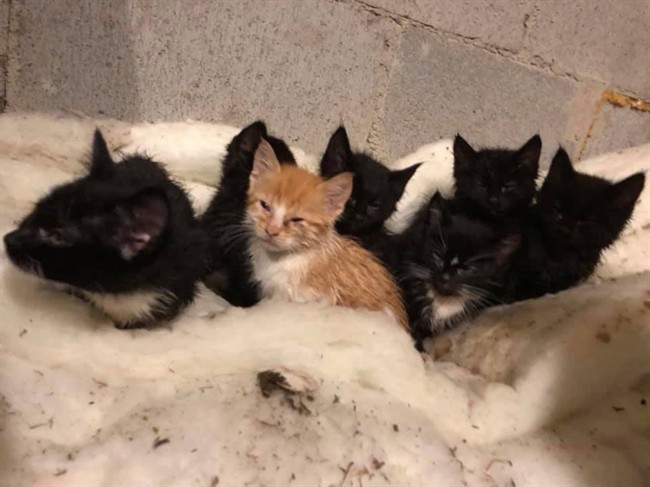 Rescued kittens are shown in Alix, Alta., in this recent handout photo. An animal rescue society says a man who reported fifteen cats and kittens in plastic storage boxes on the side of an Alberta highway has recanted his story. (THE CANADIAN PRESS/HO – Saving Grace Animal Society)

ALIX, Alta. – An animal rescue group says a man who reported he’d found 15 cats and kittens in plastic storage boxes on the side of an Alberta highway has recanted his story, explaining he made up the tale because he couldn’t find anyone to take the animals.

The Alberta Animal Rescue Crew Society says the man contacted them Friday night and told them the felines actually belonged to a family member who wasn’t able to care for them. In a Facebook post, the group says he told them he’d used plastic containers to remove the cats “out of deep concern” for their welfare as well as for children in the home, but then couldn’t find anywhere that would accept them.

“They were not left on the side of the road. He told us he made that all up to get them into care, and supposedly he had contacted numerous organizations and everybody was full or at capacity and he didn’t know what else to do,” the society’s executive director, Deanna Thompson, said in an interview Saturday.

“When I spoke to him he was genuinely sorry. He took responsibility for it, contacted authorities to let them know that he had lied about it and is willing to take on whatever might come because of that.”

The Saving Grace Animal Society said earlier that the felines were discovered in taped-up tubs near train tracks between Erskine and Stettler. The boxes had air holes punched in them, but the kittens were soaked in their own urine and feces.

Saving Grace doesn’t handle cats, Thompson said, which is why her group became involved and is now caring for the animals.

Thompson said the man contacted her group after hearing news reports about the cats.

“He felt sick to his stomach that he’d made up these lies and it went so viral,” Thompson said.

Alberta SPCA spokesman Dan Kobe said there is still an investigation into the case. However, Kobe said he wasn’t aware if police were investigating the apparent false report, saying it would be up to the Alberta Animal Rescue Crew Society to report it.

“If we find that someone should be held responsible for causing distressed animals then we’ll lay charges,” Kobe said in an interview Saturday.

An Alberta RCMP spokesman said he was not aware of whether police were investigating the report.

Thompson said her group doesn’t plan on getting police involved, and said the man acted out of desperation.

She said the six adult cats are a little sniffly but seem to be OK, while the nine kittens have upper respiratory infections, which she said is common in malnourished kittens.

Many of the responses to the society’s Facebook post appeared sympathetic to the man’s plight, with one commenter writing that “all is forgiven.”

Kobe said it’s fairly common for someone who is trying to surrender animals to be told that the agency they’ve approached simply doesn’t have the room. All rescue organizations are dealing with a lot of cats, he said, and their shelters are all either at capacity or near capacity.

He advised anyone in a similar position to keep calling until someone can help out, noting the SPCA can provide information on who to call.

He said euthanasia is always an option, but if the cat is healthy, there is usually somewhere that can help find it a new home.

“Folks should not expect they’ll be able to find a home for a cat within a day or two. It might take a little bit of work but if they continue to work at it, usually they can find a place somewhere that can take the cat, even if it takes a couple weeks or a couple months,” Kobe said.

—By Rob Drinkwater in Edmonton

← Previous: Senate to Debate Legislation That Would Order Postal Workers Back to Work Next: McPhillips Street Reopens Between Logan and Jarvis →
Tags: Alberta | Animals | Canada