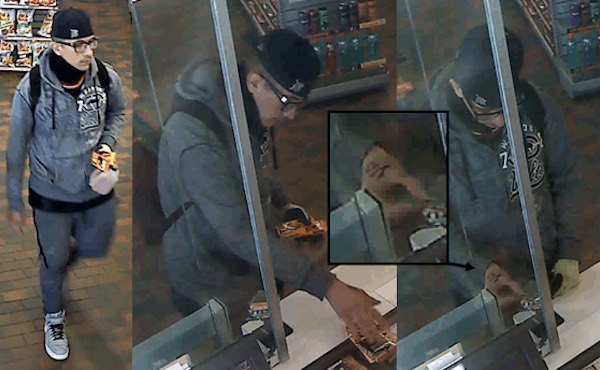 Winnipeg police are looking for this man, accused of stealing a woman’s purse on September 29 and using her bank cards at locations throughout Winnipeg. (WPS / HANDOUT)

Winnipeg police are hoping releasing surveillance photos of a man accused of stealing a woman’s purse can lead to his arrest.

A 69-year-old woman was checking her community mailbox in the Burrows Central area on September 29 when an unknown man approached her parked vehicle.

The suspect is described as Indigenous in appearance, in his early 20’s, approximately 5’6” tall and thin. He had a moustache, short dark hair and was wearing a dark jacket, white pants and grey shoes.

Police say the victim’s bank cards were used the following day at a number of locations in Winnipeg. Investigators hope the above surveillance photos can help identify him, including the tattoo on his right hand.