McDonald, Sjoberg Latest Jets Greats to Be Inducted into Hall of Fame 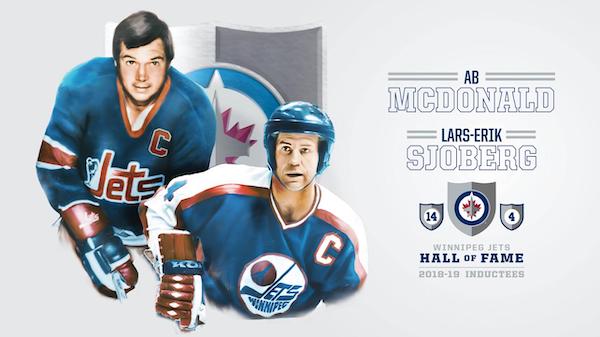 The Winnipeg Jets will induct Ab McDonald and Lars-Erik Sjoberg into the team’s Hall of Fame next year, marking the fifth and sixth members to join the elite club.

McDonald and Sjoberg join Anders Hedberg, Bobby Hull, Ulf Nilsson and Dale Hawerchuk in the honour, where it will be made official during an induction ceremony on February 26, 2019 prior to the Jets’ Alumni Night game at Bell MTS Place against the Minnesota Wild.

Ab McDonald, a native of Winnipeg, played 16 seasons in the NHL from 1958-72 with the Montreal Canadiens, Chicago Blackhawks, Boston Bruins, Detroit Red Wings, Pittsburgh Penguins and St. Louis Blues before playing the final two seasons of his career with the WHA’s Winnipeg Jets from 1972-74.

The Jets will wear their adidas adizero Authentic Pro Heritage Jerseys that night, marking only the second occasion the Heritage jersey has made an appearance this season. The jersey will go on sale to the public on November 30 through NHL.com, the adidas website, and all Jets Gear locations.