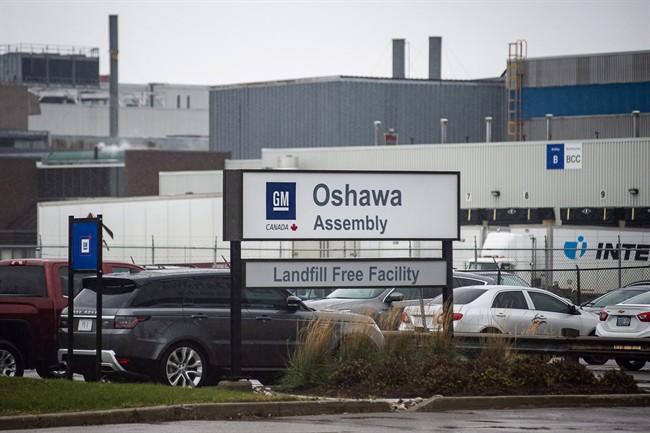 OSHAWA, Ont. – Shell-shocked GM workers streamed into the rain and chill wind after their union sent them home on Monday amid word that their plant would be closing by the end of 2019, dealing a blow to a city and region once synonymous with the automaker.

As workers and their families digested the pending loss of more than 2,500 jobs, discussion at a nearby mall turned on the uncertain reality.

Joanna Stojkovic, clutching her seven-month-old daughter, put down the phone after her GM worker husband passed on the news.

“Our livelihood is gone. We’re all in limbo right now,” Stojkovic said. “It’s a devastating blow for all of Durham Region. GM has been around for a long time.”

Word of the pending closure began swirling Sunday night, blindsiding workers and civic officials alike. Oshawa’s mayor said he had no inkling of what will be the latest blow to the city 50 kilometres east of Toronto.

Stojkovic said she blamed both GM and the union, Unifor, for the dearth of information. GM, she said, was acting completely disorganized and the communication all round had been poor.

Once dubbed the Automotive Capital of Canada, Oshawa has diversified in recent years to become an education and health sciences hub. Still, as headquarters to GM Canada, its automotive roots run deep — stretching back more than a century — and its plants over the years have been a mainstay of the regional economy, attracting workers from a wide area.

But plant closures and downsizing have also been a constant in recent years. This plant had already been slashed in half.

As he sipped his coffee, Ray Nolan, a retiree, called the latest news “huge.”

“We’ve seen this before, that’s for sure, but to completely close the operation, it’s like death. It’s done,” Nolan said. “The economy for the whole area will be badly hurt. It’s going to hurt those families trying to hang on to their homes. Those who are thinking of retiring, that’s going to be devastating.”

Nolan noted that it was just a few years ago that the then-Conservative government under Stephen Harper poured money into GM to keep plants and jobs, saying it appears the government failed to get a binding agreement from the corporation to keep the jobs here.

“It’s come back to haunt us,” Nolan said. “Those jobs will now be pulled over to the States. That’s exactly what Trump wanted.”

At the South Gate, Matt Smith joined a blockade, saying he just wants to work. The future, he said, was “scary,” especially since his wife worked at the plant as well and they have an 11-month-old baby at home.

“I don’t know how I’m going to feed my family,” Smith said. “It’s a horrible feeling. It’s a kick in the nuts.”