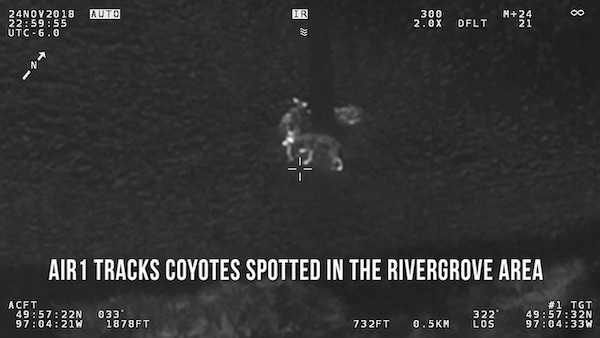 Winnipeg police were able to scare off a large coyote spotted following an elderly man and his dog in the Rivergrove area over the weekend.

Police on patrol came across the animal on a sidewalk Saturday night on Rivergrove Drive at Saul Miller Drive. They say the coyote was following the man from a distance of about 30-40 yards, but police used their vehicle’s air horn to scare the animal into fleeing to the river area.

Air 1 attended and spotted a number of coyotes at Shooter’s Golf Course on Main Street.

“Winnipeg Police are aware of a number of recent incidents of coyote sightings in the northeast areas of Winnipeg,” police said in a release.

“Coyotes are known to be most active during sunrise and sunset hours. Dog owners are advised to keep dogs on a leash, and pick up and carry small dogs if confronted.”

People who come across aggressive wildlife in the city can contact the non-emergency police line at (204) 986-6222 or by calling 911 if you feel at immediate risk.

Aggressive behaviour by coyotes can also be reported to the province’s Wildlife Branch of Sustainable Development at (204) 945-5221.