By Kelvin Chan, The Associated Press 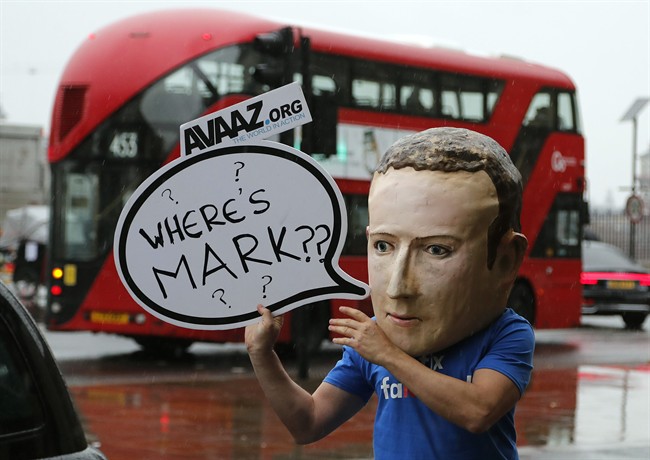 An activist wearing a Facebook CEO Mark Zuckerberg mask stands outside Portcullis House in Westminster as an international committee of parliamentarians met for a hearing on the impact of disinformation on democracy in London, Tuesday, Nov. 27, 2018. Lawmakers from nine countries grilled a Facebook executive who came in place of Zuckerberg on Tuesday as part of an international hearing at Britain’s parliament on disinformation and “fake news.” (AP Photo/Frank Augstein)

LONDON – A cohort of international lawmakers is trying to turn up the pressure on Facebook, grilling one of its executives and making a show of founder Mark Zuckerberg’s refusal to explain to them why his company failed to protect users’ data privacy.

The rare “international grand committee” of lawmakers from nine countries gathered in London to get answers about Facebook’s handling of personal data and made a point of leaving an empty seat with Zuckerberg’s name tag.

Richard Allan, the company’s vice-president for policy solutions, said he volunteered to attend because Zuckerberg had already appeared before other committees this year, including in Washington and, briefly, Brussels.

Lawmakers from Canada, Ireland, Brazil, Argentina, Singapore, Belgium, France and Latvia joined their British counterparts at the parliamentary select committee hearing — the first such cross-border event in London since 1933.

British select committees are used to investigate major issues and have the powerful — from CEOs to government officials — explain their decisions in a public forum. They don’t have the power to make laws but the government takes their recommendations into account when formulating new policies.

Allan appeared after the committee’s chairman, Damian Collins, took the unusual move of seizing a trove of confidential internal Facebook documents from a visiting U.S. tech executive. The committee wanted the files, which have been sealed by a California judge, in the hope they would shed light on Facebook’s privacy policies.

Collins, who has not yet made the documents public, asked Allan about one item he said was of considerable public interest that suggests Facebook was alerted to possible Russian hacking years before it became a major issue. He said the document indicates a Facebook engineer notified his superiors in October 2014 that “entities with Russian IP addresses” were pulling more than 3 billion data points a day from Facebook.

Allan said that information was “at best partial and at worst potentially misleading.”

Facebook said in a statement that the “the engineers who had flagged these initial concerns subsequently looked into this further and found no evidence of specific Russian activity.”

The committee obtained the files from Theodore Kramer, CEO of app maker Six4Three, after they discovered he was in London, threatening him with prison if he refused. Kramer’s company acquired the files as part of a legal discovery process in a lawsuit against Facebook.

Allan apologized frequently but revealed little new about Facebook and its operations. He acknowledged that the company has not been without blame in how it handled various scandals.

“I’m not going to disagree with you that we’ve damaged public trust with some of the actions we’ve taken,” he said.

Allan was responding to Canadian lawmaker Charlie Angus, who said the social media giant has “lost the trust of the international community to self-police,” and that governments have to start looking at ways to hold the company accountable. Facebook accepts that a regulatory framework is needed, Allan said.