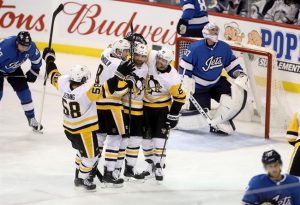 WINNIPEG – The Pittsburgh Penguins old guard and young blood came together to rally past the Winnipeg Jets on Tuesday night.

Sidney Crosby, a 14-year NHL veteran, had a goal and 24-year-old Zach Acton-Reese added the late winner as Pittsburgh staged a third-period comeback to top Winnipeg 4-3. It was Aston-Reese’s second goal of the season. Riley Sheahan also had his second and Derek Grant his first to round out the Pittsburgh (10-8-5) scoresheet.

“It’s huge when you get contributions like that from throughout your lineup, especially in the bottom six,” said Penguins coach Mike Sullivan. “I just think that makes us that much more difficult to play against and on a night like tonight, it’s the difference in the hockey game.”

Crosby also gave the bottom six on his team a lot of credit for their performance.

“Yeah, they’re doing a lot of good things and a lot of those guys are a big part of killing penalties (the Pens had two) and getting big kills for us, so to see them chip in offensively is great,” said Crosby. “They deserve it with how hard they work.”

Mark Scheifele scored twice for the Jets (13-8-2) and Brandon Tanev had another.

“We’ve just gotta play the way we know how to,” said Scheifele. “We get away from it, we start doing things that aren’t part of our strategy. We turn pucks over, we don’t get pucks deep. We’ve just gotta simplify in those areas. We’re a simple team, we get it deep, we work teams in the offensive zone and make them go an extra 30 to 50 feet every time.”

Head coach Paul Maurice agreed that his Jets lost their way in the final period.

“We gave up five shots in the third,” he said. “It wasn’t a tilt to the ice by any means. I think we’re going to like our chances better than theirs in the third. Gave up a tough one, got a bad break on one and it’s in the back of the net. That’s it. It’s a tight game.”

Tanev got things started for the Jets in the first at 7:01 with his fourth goal of the season, coming on a short-handed breakaway with a wraparound that beat Casey DeSmith.

Crosby tied it up at the 18:13 mark of the first period with a backhanded shot that fooled Jets netminder Connor Hellebuyck. It was Crosby’s 10th goal this season.

Scheifele put the Jets back in the lead just 39 seconds into the second on a feed from captain Blake Wheeler.

But that only lasted until Sheahan got credit for poking a loose puck over the line, after Hellebuyck failed to corral it at 4:40.

Wheeler also set up Scheifele’s second goal of the night and 13th of the season, that rocketed past DeSmith before he had much time to react at 16:00.

Grant evened things up once more for the Penguins at 5:08 of the third when he found the five-hole.

Phil Kessel then set up Aston-Reese with a perfect pass to the front of the net at 14:48.

“We were up for this one,” said Grant. “We didn’t give up in here. We stuck to the game plan and tried to play the right way the whole game we got some big saves from Casey … some big blocks from guys and we really wanted this one.”

DeSmith has been thrust into the starter’s job for the Penguins as regular netminder Matt Murray is sidelined with a lower-body injury, after time off due to a concussion earlier this season.

Crosby is closing in on Mario Lemieux’s all-time Penguins NHL game record of 915. He has to play 33 more games to pass the Hall of Famer.

“With some of the injuries I’ve had, you appreciate it more and more,” said Crosby. “Players always say as they get older they appreciate it more and more because you only have a window to play, it’s only a small window. He did so much for the team and the city, just being able to play at this age, I still have that competitive in me and I don’t feel any older. It’s good to be in that company I guess.”