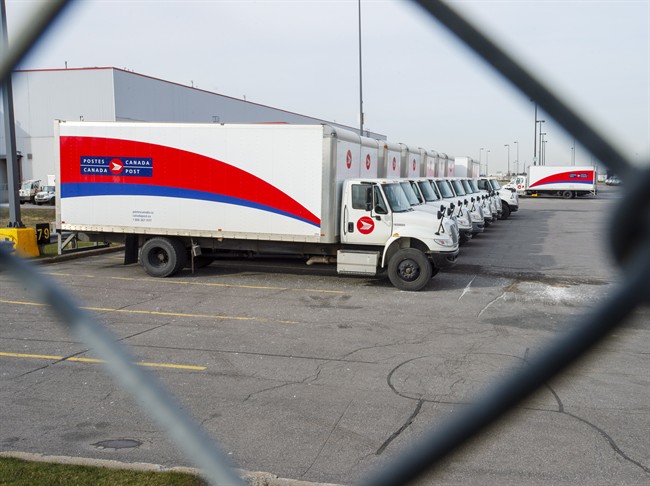 Idle Canada Post trucks sit in the parking lot of the Saint-Laurent sorting facility in Montreal as rotating strikes hit the area on Thursday, November 15, 2018. (THE CANADIAN PRESS/Ryan Remiorz)

OTTAWA – Canada Post employees have been legislated back to work after more than five weeks of rotating strikes, but that isn’t stopping their brethren from picking up picket signs to support them — and once again slowing the mail in the process.

Just after the federal government passed a law this week forcing an end to strikes by Canadian Union of Postal Workers members, the union warned that other unions could act out in response.

And, today, they did just that.

The protesters said they would allow workers into the facility, which is the third-largest postal sorting plant in the country, but trucks with mail would not be allowed in or out.

CUPW national president Mike Palecek says while his 50,000 members are prohibited from picketing, other union members face no similar restrictions.

“What we’re seeing in Vancouver today is that instead of resolving our dispute with Canada Post, the Trudeau government has picked a fight with labour,” Palecek said in a statement. “‘An injury to one is an injury to all’ is much more than a slogan.”

The union has called the back-to-work legislation, Bill C-89, unconstitutional.

The legislation became law late Monday, forcing postal workers back to work yesterday while an arbitration process is launched to try to settle the contract differences between Canada Post and its major union.

The Crown corporation said it was doing what it could to get mail and parcels sorted in B.C. while the non-CUPW pickets disrupted delivery truck traffic.

“Canada Post is making every effort to minimize service disruptions and resolve the situation.”

The agency has warned of significant delivery delays across the country through January as a result of the rotating strikes by CUPW members that began Oct. 22.