Conviction Quashed for Manitoba Man Who Spent 23 Years Behind Bars 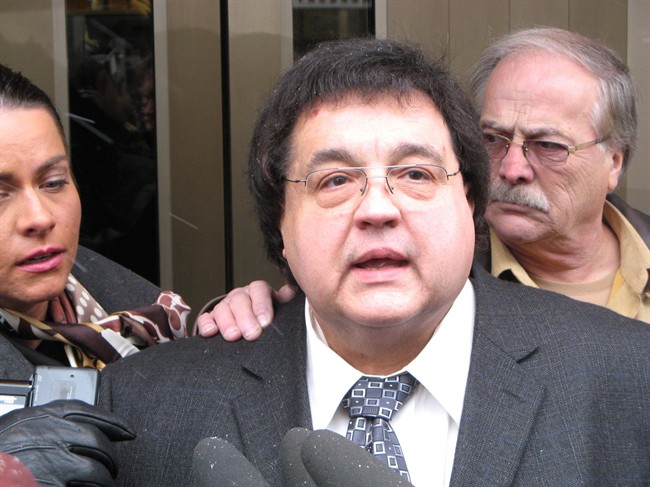 Frank Ostrowski, who has been freed on bail while his murder conviction is being reviewed, talks to reporters in Winnipeg on December 18, 2009. (THE CANADIAN PRESS/Steve Lambert)

WINNIPEG – A Manitoba man who spent 23 years in prison for first-degree murder had his conviction quashed by the province’s Court of Appeal Tuesday.

A panel of three judges ruled that Frank Ostrowski was denied important information that could have helped his defence when he was convicted in 1987.

Ostrowski was found guilty of ordering the fatal shooting of a drug dealer based largely on the testimony of a key witness — Matthew Lovelace — who had separate charges of cocaine possession stayed in exchange.

Ostrowski’s lawyers and the jury were never told about the deal and Lovelace told the trial he did not receive any favours in exchange for his testimony.

Earlier this year, Crown attorney Randy Schwartz told the Appeal Court that the trial was unfair and Ostrowski’s conviction should be overturned.

Ostrowski’s lawyer wanted the Appeal Court to go a step further and formally acquit Ostrowski, now in his late 60s.

The court decided to quash the conviction, order a new trial and enter a judicial stay of proceedings.

“There is a significant amount of other evidence that supports the details provided by Mr. Lovelace, such that it would remain open to a jury to find his testimony about the accused credible and reliable,” Justice Holly Beard wrote on behalf of the three-member appeal panel.

“It is not clearly more probable than not that the accused would be acquitted at a hypothetical new trial.”

However, with all that has happened, a new trial is not warranted, Beard wrote.

“Given the length of time that has passed since the events at issue, including the trial, and the significant amount of time that the accused has already spent in custody, I agree that there should be a judicial stay of proceedings regarding the new trial, and I would so order.”

Ostrowski maintained his innocence throughout his incarceration. In 2009, a Court of Queen’s Bench judge cited serious concerns with the conviction and released Ostrowski on bail.

In 2014, then-federal justice minister Peter MacKay ruled the case a likely miscarriage of justice and ordered the Manitoba Court of Appeal to review it.

Ostrowski’s lawyer, James Lockyer, said Tuesday’s ruling was a relief because Ostrowski is no longer in custody or on bail for the first time in three decades.

But, Lockyer said, no one is paying any price for the prosecution of his client.

“I think above all, it’s that there’s no accountability in this case,” Lockyer said. “The man spent 32 years under a first-degree murder claim, and no one’s accountable for that 32 years except him.”

The Ostrowski case is one of a few high-profile wrongful murder convictions that have come to light in Manitoba.

James Driskell was convicted of killing a friend in Winnipeg in 1990. The verdict was based partly on testimony from a witness who was given tens of thousands of dollars in expense payments as well as immunity on an arson charge. The trial was not told about the deal. Driskell’s conviction was quashed in 2006.

Kyle Unger was convicted, based partly on hair samples found at the scene, of killing a teenage girl at a rock festival in 1990. DNA tests years later showed the hair did not belong to him.

Thomas Sophonow was found guilty of killing a waitress in 1981. That was based largely on the testimony of a witness who contradicted in court what she had told police. The defence was not told about the contradiction and Sophonow spent four years in prison before he was freed.