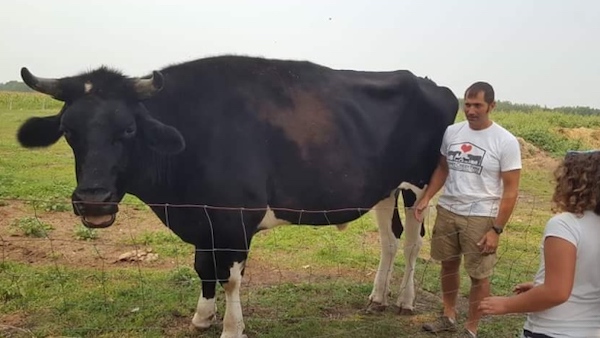 ‘Dozer’ the steer measures 6’5″ and towers over the other animals at Kismet Creek Farm near Steinbach, Manitoba. (HANDOUT)

STEINBACH, Man. – A Manitoba farm sanctuary is inviting people to meet a gentle giant after a photo of an Australian steer towering over other cows went viral.

Knickers the Holstein has been making headlines Down Under because he stands just under two metres in height and weighs about 1.4 tonnes.

But Dozer the steer near Steinbach stands about 2.5 centimetres taller.

And that is no bull.

Karl Schoenrock from Kismet Creek Farm took in Dozer last spring from an owner in Alberta who wanted a better of quality of life for the massive steer.

Schoenrock says the farm takes animals in to live out their natural lives.

“Everybody is pretty much smaller than Dozer. Even our horses and everything else, nothing compares,” he said Wednesday.

“He is just so calm, with his demeanour.”

Dozer currently shares a pasture with two other steers and a horse. (CTV Winnipeg)