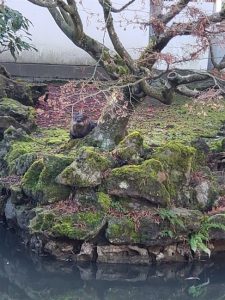 An otter is seen behind a tree in the Dr. Sun Yat-Sen Classical Chinese Garden, in Vancouver in a recent handout photo. (THE CANADIAN PRESS/HO-Sadie Brown,)

VANCOUVER – A tranquil garden in Vancouver where a crafty otter has devoured about 10 expensive koi is set to reopen this morning.

Dr. Sun-Yat Sen Classical Chinese Garden closed last Friday after the river otter moved into a pond and began feasting on the carp.

The city’s park board says garden staff lowered the water level on Tuesday and removed the two remaining adult koi and 344 juveniles.

The fish were transferred to Vancouver Aquarium for safekeeping, joining a third adult koi that was removed Saturday.

The park board says the otter first moved into the garden on Nov. 17 but has not been seen in a few days.

It says staff will refill the pond with water and modify the garden’s entrance and exits to deter future otter visits.