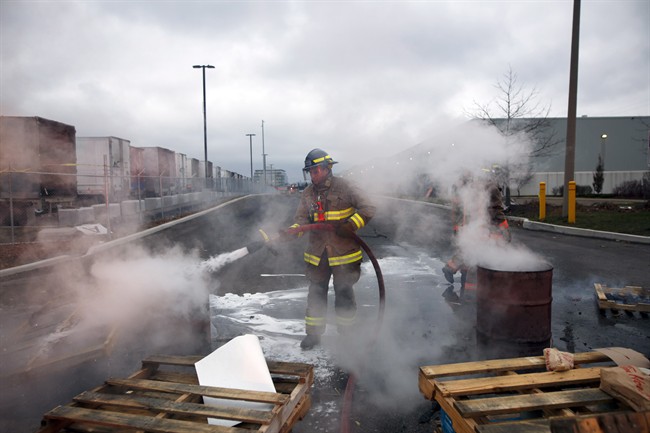 A fireman works to extinguish a burning barrel at Canada Posts’ Gateway Postal Facility, after union groups and activists blocked truck traffic to and from the facility in support of Canada Post workers who were recently legislated back to work by the federal government, in Mississauga, Ont., Saturday, Dec. 1, 2018. (THE CANADIAN PRESS/Cole Burston)

MISSISSAUGA, Ont. – Canada Post says protesters blocking mail from flowing in and out of one of the country’s busiest postal hubs are violating a court order, and the Crown corporation is “considering all available legal options.”

The protesters rallying outside the facility in Mississauga, Ont., are largely members of the Canadian Union of Public Employees, acting in solidarity with postal workers who were legislated back to work last week.

The back-to-work legislation was passed on Monday, following weeks of rotating strikes by the Canadian Union of Postal Workers.

CUPE says 19 protests are scheduled this weekend at facilities across the country, and demonstrators will allow workers to enter but not let mail out of the plants.

The Ontario branch of that union says the protesters have been served with an injunction, but they still plan to demonstrate in solidarity with the postal workers.

In a statement Saturday afternoon, Canada Post says it has contacted police and is considering its options to deal with the demonstrations.

“We have contractual commitments to our customers, as well as statutory obligations to ensure important mail is being received by all Canadians,” the Crown corporation said.

“We have asked the police for assistance and we are considering all available legal options.”

Injunctions were also granted by courts in Alberta and British Columbia, prohibiting anyone from obstructing or interfering with people or vehicles entering or exiting Canada Post facilities.