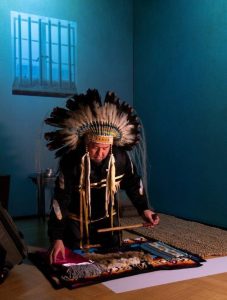 Derek Nepinak, former grand chief of the Assembly of Manitoba Chiefs, prepares for a 27-hour fast inside a replica of Nelson Mandela’s jail cell inside the Canadian Museum for Human Rights. (KEITH FRASER / CMHR)

WINNIPEG — A Manitoba Indigenous leader is going 27 hours without food or drink while sitting behind bars in a makeshift cell inside the Canadian Museum for Human Rights.

Derek Nepinak began his ceremonial fast on Monday at 10 a.m. as a personal journey to reflect on the parallels between the apartheid system in South Africa and the experience of Indigenous people in Canada.

“Nelson Mandela’s life taught us that even while contained within the most oppressive and violent of racialized colonial state mechanisms, love and freedom of spirit can persevere,” Nepinak said in a video statement before entering the cell (watch below).

“We welcomed this opportunity to encourage conversations about human rights and forge connections between communities,” said CMHR president and CEO John Young.

“Mandela’s example continues to be a source of inspiration for people around the world – including here in Canada – who are striving to build relationships in the shadow of gross human rights violations.”

Nepinak is a former grand chief of the Assembly of Manitoba Chiefs, former chief of the Pine Creek First Nation and former chair of the West Region Tribal Council.