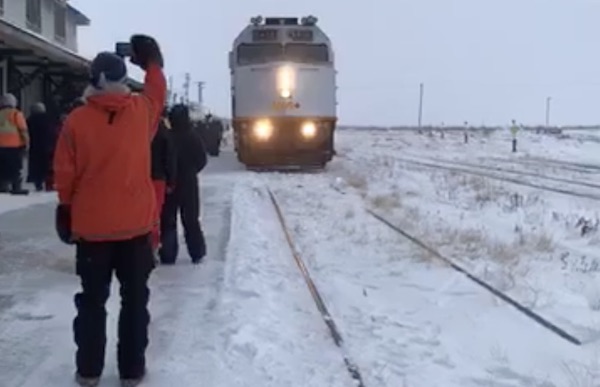 The first passenger train to visit Churchill, Manitoba in 16 months arrived in the community on Tuesday, December 4, 2018. (TOWN OF CHURCHILL)

The first passenger train to arrive in Churchill in 16 months rolled into the northern Manitoba community on Tuesday.

The VIA Rail train departed Winnipeg last weekend and was welcomed just a few short weeks after the first freight train returned in November.

“Our community faced huge challenges when the rail line went down, but we pulled together,” said Churchill Mayor Mike Spence.

The rail line was washed out in 2017, damaging the tracks that cut off the town of 900 people on the shore of Hudson Bay.

“We are known for our polar bears and beluga whales, but Churchill also offers world-class year-round tourism opportunities. We are confident the return of VIA trains is going to bring even more tourists to
experience all we have to offer,” Spence added.

Spence says he was informed by a tour operator that guests have been holding onto their deposit for two years waiting for the train’s return.

Spence says having a strong 2019 port season is the town’s next priority.

Some great video showing the VIA train crossing Goose Creek Road (about 7 kms from Churchill) and the the train arriving to a boisterous greeting at the Churchill station! pic.twitter.com/wfkU4ZrpLB

I’m in #Churchill for the arrival of the first passenger train in 560 days and it’s a party! pic.twitter.com/vhIgr87YpP

← Previous: Manitoba Wants to Allow Easier Disclosure of Personal Health Information Next: Cows Can Be Pessimistic and It Affects Their Ability to Cope with Stress: Study →
Tags: Churchill | Manitoba