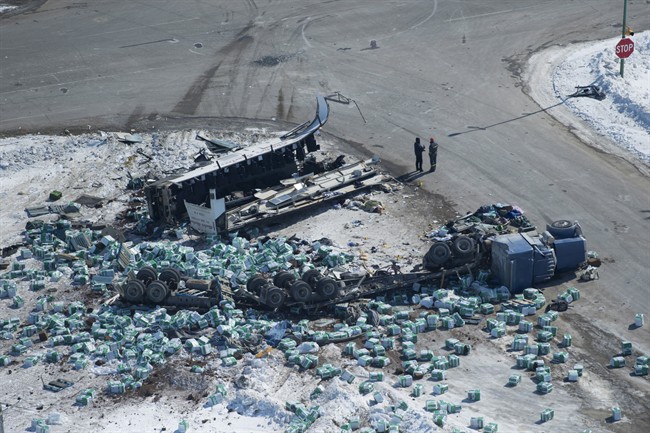 The wreckage of a fatal crash outside of Tisdale, Sask., is seen Saturday, April 7, 2018. (THE CANADIAN PRESS/Jonathan Hayward)

Starting in March, drivers seeking a Class 1 commercial licence will be required to undergo at least 121.5 hours of training.

Joe Hargrave, minister for Saskatchewan Government Insurance, said the crash — that killed 16 people and injured 13 when the junior hockey team’s bus and a semi collided at a rural intersection — influenced Monday’s announcement.

“It made it more clear that we need to get this done.”

But he said the new training “isn’t a Humboldt Broncos plan.”

Drivers will be instructed for 47 hours in a classroom, 17.5 hours in a yard and 57 hours behind the wheel as part of the new program. There’s also a 12-month safety monitoring program for drivers now in effect.

Ontario is currently the only province that has mandatory truck driver training consisting of 103.5 hours.

Hargrave said Saskatchewan used Ontario’s training guide but modified it to give drivers more time behind the wheel and air-brake training.

Work on the mandatory training started in 2017 and western provinces agreed a basic training program was necessary, Hargrave said.

Alberta is making driver training with a standardized curriculum for new commercial truckers and bus drivers mandatory as of March 1. All new commercial carriers in Alberta will have to prove they comply with transportation safety regulations before they start operating.

Susan Ewart, executive director with the Saskatchewan Trucking Association, said the change in Saskatchewan is a step forward.

“Having mandatory entry-level training will increase that base set of knowledge and skill when they hire someone at a trucking company,” she said.

Saskatchewan farmers driving semis within the province won’t require the training yet because Hargrave said farmers aren’t on the road all year. He said the province is still consulting on the issue.

“There should be different sets of training but to leave it completely without any training is really leaving a big hole in terms of safety,” he said.

Hargrave said grants may be offered to offset the costs and the province has broached the idea of having the training costs covered under the federal student loan program.

The semi-trailer involved in the Broncos crashed was owned by Sukhmander Singh of Adesh Deol Trucking in Calgary. He faces eight charges relating to non-compliance with federal and provincial safety regulations for alleged offences which occurred before the April crash.