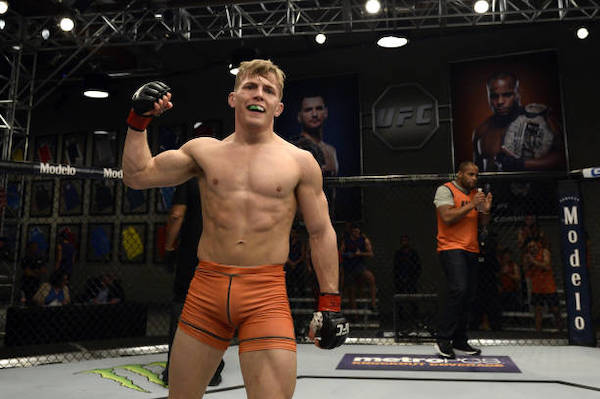 Brad Katona reacts after finishing three rounds against Kyler Phillips during the filming of The Ultimate Fighter: Undefeated on February 9, 2017 in Las Vegas, Nevada. (Photo by Brandon Magnus/Zuffa LLC/Zuffa LLC via Getty Images)

TORONTO – If fighting doesn’t pay off, Brad (Superman) Katona has a degree in mechanical engineering in his back pocket.

But so far so good for the 26-year-old from Winnipeg.

Katona, competing as a featherweight, won “The Ultimate Fighter Undefeated” reality TV show in July with a unanimous decision over Jay Cucciniello in Las Vegas. On Saturday, returning to his more familiar bantamweight division, Katona (8-0-0) faces American Matthew Lopez (10-4-0) on the undercard of UFC 231 at Scotiabank Arena.

While Katona is new to fighting as a career, he is a veteran of martial arts. He took his first karate class at five — he and his brother were Power Ranger fans so chose karate over hockey — and got his black belt at 14. Their father, a UFC fan, then put them into Brazilian Jiu-Jitsu at the Winnipeg Academy of Mixed Martial Arts.

He continued his MMA studies during high school and his time as the University of Manitoba, hitting the books while punching opponents. His first pro fight was October 2014.

“I definitely feel like sport helped me at school as well as getting that engineering degree helped me in sport,” said Katona. “An engineer knows how to solve problems and that’s what every day in the training room is.”

“The sad part is you’re never quite satisfied,” he added. “But I’d rather be pushing the barrier on everything than sitting back completely 100 per cent satisfied.”

After completing his degree in May 2016, he said the time was right to focus full-time on fighting.

“I was reaching a point in my dream career of being a professional athlete that it didn’t make sense to hold off. If I didn’t make that attempt, it would be something I would regret for a long time.”

Katona said he and his girlfriend Katie Saull, a fellow fighter, soon knew it was time to make a move and “step things up.”

“Otherwise the game will pass you on. I wanted to be ahead of that curve and be training with (the) best team that I can be.”

In November 2017, the five-foot-six 135-pounder and Saull pulled up stakes and moved full-time to Dublin to train at Straight Blast Gym Ireland under coach John Kavanaugh, who coincidentally also has an engineering degree. The gym is famous for being the home of Irish star (The Notorious) Conor McGregor.

“They welcomed us in and it was just a right fit,” said Katona, who also has a black belt in Brazilian Jiu-Jitsu.

“It’s a big gym but it has also a small gym feel,” he added. “There’s a tight-knit community around the team members.”

He appreciates Kavanaugh’s hands-on approach during training, rather than handing off to an assistant coach.

Katona says he sees McGregor at the gym but doesn’t get to rub shoulders too much with the former featherweight and lightweight champion.

“When you’ve made it to the level that he has, being a two-division champ and being the biggest superstar in the sport, you’re not doing the same practices as everybody else. But he still shows up for the team practice from time to time.”

McGregor is also not above leading a class himself, Katona added.

Katona was soon on the move again, leaving Dublin for Las Vegas to try out for “The Ultimate Fighter.” He made the cut and spent six weeks on the show.

Season 27 of the reality TV series featured 16 undefeated fighters — competing until the tutelage of then-heavyweight champion Stipe Miocic and light-heavyweight title-holder Daniel Cormier for a featherweight and lightweight contract with the UFC.

Living in a well-appointed house with 15 rivals was “one of the more alien experiences I could say I’ve done,” said Katona, who was part of Team Cormier.

“But I tried to enjoy it. I tried to realize that I was waking up every morning in a mansion That’s pretty cool in itself.”

But it was a grind always being on the edge of having to make weight and fight, he acknowledges.

Katona was the first Canadian to win the show, other than “The Ultimate Fighter Nations,” which featured a Canada versus Australia format.

These days, he and Saull enjoy living in Dublin

“Everything’s different, everything’s slightly different … from grocery shopping to walking around,” he said.

“It makes the little things exciting,” he added.

The Winnipegger pushed “pretty hard” to get on the Toronto card, looking forward to fighting on home soil.

“It’s also a big card so there’s going to be a lot of eyes, both in person and on TV.”

He calls Lopez a difficult opponent — and a dangerous one after two straight losses.

“I think he knows this could be make-or-break for him. If he loses this, the UFC could potentially cut him. So I’d expect him to put in the most work that he’s ever done for this fight to keep his job in the UFC.”