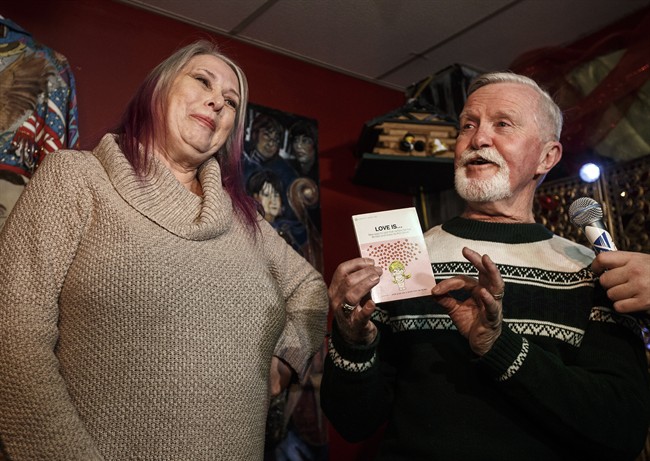 Adrian Pearce and his ex high school girlfriend Vicki Allen open the 47-year-old gift, a book called Love Is, which she gave him when they broke up in 1971, in St. Albert, Alta., on Thursday, Dec. 6, 2018. 47 years ago Adrian Pearce was given the gift the same day Vicki Allen broke up with him and he never opened it until now. (THE CANADIAN PRESS/Jason Franson)

ST. ALBERT, Alta. – A man in Edmonton who made international headlines for holding onto a wrapped Christmas gift from a high-school girlfriend who dumped him nearly 50 years ago finally learned what it was on Thursday when she travelled to the city and opened it for him.

But when she handed it to him, she broke up with him. Dejected, Pearce returned to his family’s home, threw it under the Christmas tree and vowed never to open it.

The story last December about the unopened gift appeared on TV, newspapers and websites around the world. And as Allen stood on a stage in a packed cafe northwest of the city and peeled away the paper with Pearce standing beside her and his wife, Janet, in the audience, she herself didn’t know what she’d see because it was so long ago and she’d forgotten.

“Oh no!” Allen exclaimed when she finally saw. “I can’t give that to him!”

It was a small book called “Love Is: New Ways To Spot That Certain Feeling” with cartoons and sayings about love.

“The irony is extreme,” Allen cried.

The event was a fundraiser for the Christmas Bureau of Edmonton, a local charity that provides Christmas meals to families in need.

“Love is all of us, all of you, here tonight for the Christmas Bureau of Edmonton,” Pearce responded.

Days after Pearce’s story appeared last Christmas, a friend who knew them both in high school sent Allen a link to one of the many articles written about it. Allen responded by clicking “like” on some of Pearce’s Facebook posts, and Peace figured out who it was. They got in touch, and eventually Pearce and his wife were invited to meet her where she now lives in British Columbia.

They learned that they all got along. They also learned the reason Allen dumped Pearce all those years ago.

It turned out that while Allen was shopping for Pearce’s gift at the mall, she met another boy and he kissed her on the spot.

“It wouldn’t have been so bad, but I kissed him back,” Allen said.

She said she knew Pearce would find out she had betrayed him. She knew it was over between them.

“It was a very innocent relationship. We were in high school,” Allen explained about her relationship with Pearce.

“I didn’t know he felt as intensely as he did.”

For years, even after he’d married, Pearce still placed the dog-eared gift under the tree every Christmas. He enjoyed the mystery of it, but eventually his wife put her foot down when their daughter, then five, wanted to open it.

“She said, ‘Daddy, when you die, I’ll be able to open it then, right?’ I told him he could keep it, but we just didn’t want (the gift) out in public,” she explained.

“I’m pretty secure in our relationship. I’ve never been jealous.”

Allen admitted some trepidation about meeting Pearce and his wife. Was he a stalker? He was a nice boy in 1971, but maybe, she thought, “he’s probably become an expert axe murder.”

Some people had accused Allen of being a terrible person for giving Pearce a Christmas present and then breaking up with him. Pearce has also been called everything from “Heartbroke Bloke” in the British press to “moron” in one New York newspaper.

He’s since written a book about the whole experience, and his wife and Allen contributed chapters.

“I think it’s absolutely fantastic that we’re friends. My wife is friends with (Vicki),” Peace told the crowd.

“We’re in a fantastic place where all you can feel is love.”