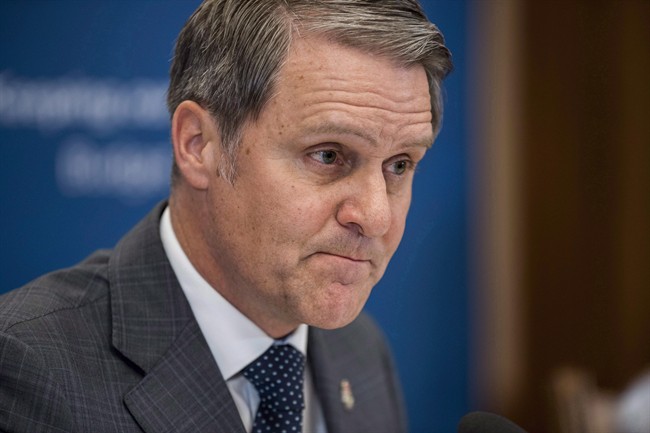 WINNIPEG – Manitoba and the federal government are pledging a combined $8.4 million to tackle the province’s growing methamphetamine crisis.

Manitoba Health Minister Cameron Friesen said meth addiction is creating different problems than other drugs because the high can last for hours and, in some cases, days. It also takes much longer to get clean.

“Whoever I talk to says meth is different,” Friesen said on Friday. “It is not like other illicit drugs that professionals have encountered before.”

Numbers from Winnipeg’s health authority show there has been a 1,200 per cent increase in people going to hospitals because of methamphetamine — from 12 in April 2013 to 218 this past April.

An advisory note to the health minister obtained by the Manitoba New Democratic Party through a freedom-of-information request in October said the number of people entering treatment at publicly funded centres for meth addiction had increased 700 per cent since 2012 to 744 from 102.

The money will go to increasing capacity for people who are going through withdrawal in Winnipeg and Brandon. Friesen said that will allow for more flexibility and longer stays to tackle meth addiction. The funds will also be used to create a mobile withdrawal service.

Dr. Jitender Sareen, a medical health director with Winnipeg’s health authority, said the new money will help fill a major gap in health care. He said the first phase of getting off meth is the immediate withdrawal and it often happens in an acute-care setting such as an emergency room.

But people are still at risk during the second phase. They often have anxiety, depression, psychotic symptoms, cravings and nightmares for months after quitting the drug.

Half of the new funds come from the federal government’s Emergency Treatment Fund, which was created to address the opioid crisis. International Trade Minister Jim Carr, who represents Manitoba in the federal cabinet, said for many people treatment is the best option.

“Unfortunately finding and accessing appropriate treatment can be difficult,” he said.

A request for proposals is to be issued in the new year and services are expected in the spring. Friesen said he expects the additional support to help at least 130 people each year.

← Previous: Girl Opens Christmas Present She Gave to Boy When She Dumped Him in 1971 Next: Woman Allegedly Lit Paper Towels on Fire, Causing $60K in Damage →
Tags: Drugs | Manitoba | Winnipeg