Jets Blanked 1-0 by St. Louis as Allen Posts First Shutout in a Year 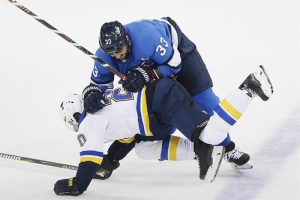 WINNIPEG – Jake Allen wasn’t relieved to have his first shutout in a year. He didn’t even remember when his last one was.

The St. Louis Blues netminder made 26 saves in a 1-0 victory over the Winnipeg Jets on Friday to record his first shutout since Dec. 7, 2017.

“I could care less, honestly. A big win for us,” Allen said. “I’m not a stats guy, unfortunately, but maybe it’s a lucky day every year, so I’ll mark this one on my calendar.”

Colton Parayko scored for the Blues (10-13-4) during a second-period power play, a goal that was initially credited to Alex Steen.

The Jets, who went 0 for 6 on power play, only had six shots on goal in the third period.

“Yeah, I’ll be damned,” captain Blake Wheeler said. “We’re going to throw a goose-egg up every once in a while.

“It’s our job, especially in a close game, to come through there (but) weren’t able to do it.”

He credited Allen with making some big stops.

“Their guy made some really, really good saves,” Wheeler said. “(We) cracked a post on a play we normally score on. From there, they did a good job, especially on our entries, they were aggressive.”

Connor Hellebuyck made 26 saves for the Jets (17-9-2), who had a season-long four-game winning streak end.

Winnipeg was last shut out in their fourth game of the season, a 3-0 loss In Nashville on Oct. 11.

The Jets, who were starting a four-game homestand, outshot the Blues 13-9 in the scoreless first period.

Blues defenceman Robert Bortuzzo blocked a couple of hard shots by Patrik Laine during a Winnipeg power play early in the second period. Laine scored five goals in an 8-4 victory over St. Louis on Nov. 24.

“It’s something we definitely want to take pride in, is being a good defensive group, and we weren’t happy with what happened at home last game, obviously,” Bortuzzo said.

“Guys stepped up and made hard plays in hard areas and tried to take a lot of their shooting areas away.”

Parayko’s shot from the point may have hit a Jets player before it went by Hellebuyck at 14:56. St. Louis finished the game 1 for 2 with the man advantage.

Winnipeg had its fifth power play early in the third, but didn’t get a shot at Allen. The Blues got the period’s first shot just over six minutes in and then the Jets had another power play, but didn’t put the puck on Allen.

The Jets still didn’t have a shot on goal when Dmitry Kulikov’s shot hit the post with 7:10 remaining. A few seconds later, a Myers shot hit Allen.

Jets defencemen Dustin Byfuglien and Kulikov were back from injury. Byfuglien missed four games with a concussion and Kulikov sat out 12 with an upper-body injury. Defenceman Josh Morrissey (lower body) missed a second straight game.

“I thought we had some good looks,” said Byfuglien, who led the Jets with 28:56 of ice time. “Our chances were there, but that’s the way it goes some nights and we can’t get down on ourselves.

“We just got to forget about this one and move on to the next game.”