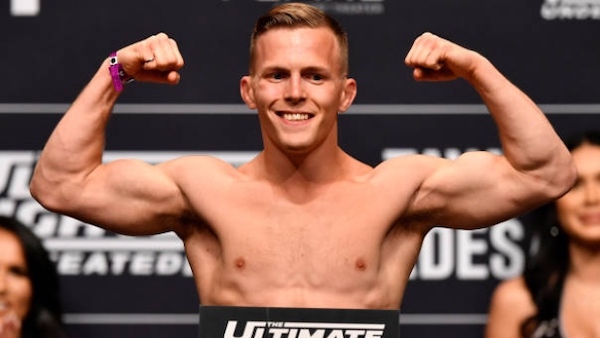 TORONTO – Winnipeg bantamweight Brad (Superman) Katona won a unanimous decision — and perhaps a submission as well — over Matthew Lopez on the undercard of UFC 231 on Saturday night.

Katona (9-0-0) had Lopez in a choke on the ground as the fight ended and the American, his arm going limp, appeared to have lost consciousness as the referee broke them up. Still it went to the judges’ scorecards. Lopez (10-5-0) had trouble getting off the canvas as Katona walked around the cage with his arms in the air waiting for the decision.

“There is only one word to describe how I’m feeling — amazing,” said Katona. “To be back here in Canada fighting for the Canadian fans and giving them our first victory of the night is a very special thing.”

Lopez took Katona down several times but was unable to do any damage as Katona quickly fought his way back to his feet. Katona, who seemed to have a bigger gas tank than his opponent, scored with kicks throughout.

It was the first fight for Katona since winning “The Ultimate Fighter Undefeated” reality TV show as a featherweight in July. Katona, who has a degree in mechanical engineering from the University of Manitoba, trains at the Straight Blast Gym in Dublin — home to (The Notorious) Conor McGregor.

Canadians went 2-3 on the undercard.

Theodorou (17-2-0) stayed on the move and looked to counter-attack against the powerful Anders, who stalked him from the get-go. He did well to finish the second round after being knocked down by Anders (11-3-0).

Theodorou rallied in the third with a varied attack against Anders, who stuck with his blunt instrument approach to the battle.

“I knew it was a close fight so you always wonder how the judges scored it when you here a split decision,” said Theodorou. “But I felt like I had done enough to win. I knew he won the second round but I felt like I’d done enough in the third to get the victory.”

Theodorou used his post-fight interview to speak out in favour of medical marijuana.

The UFC does not test for cannabis out-of-competition but it is prohibited around fight night. For someone like Theodorou, who is prescribed cannabis for bilateral neuropathic pain in his hands, wrists and elbows, that means he has to stop using it several weeks before his fights.

He has been campaigning some 18 months to get a therapeutic-use exemption.

The UFC’s anti-doping partner is the U.S. Anti-Doping Agency, which relies on independent experts to assess cases like Theodorou’s. Their assessment continues.

Burns (15-3-0) had a big takedown midway through the first round and then knocked him down with a left, trying for a submission as the round ended. Thanks to Burns’ body kicks, Aubin-Mercier’s side looked like someone had emptied a steaming kettle on it.

Aubin-Mercier (12-4-0) was staggered again in the second round and, after fighting off another submission on the ground, ended the fight exchanging blows on the feet.

Nelson (12-2-0) entered to cheers and had a good first round, but ultimately was no match for Brazilian jiu-jitsu black belt Diego Ferreira (14-2-0) on the ground. The fight was stopped at 1:23 of the second round.

Welterweight Dhiego Lima (15-7-0) knocked out Chad (The Disciple) Laprise of Chatham, Ont., (14-4-0) with a left hook to the chin at 1:37 of the first round. The savage one-punch KO ended a four-fight losing streak in the UFC for the American-based Brazilian, who walked away with his arms raised after felling his foe.

Austrian light-heavyweight Aleksandar Rakic (10-1-0) stopped light-heavyweight Devin (Brown Bear) Clark (9-3-0) at 4:05 of the first round, stunning the American with a spinning back first and then finishing him off with some nasty strikes. Rakic absorbed some illegal knees en route to the win.